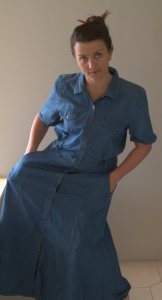 In the beginning of January, I told you guys I was going to start accepting Reader Submissions.  I wanted to see what cool stuff you guys are refashioning, and I want everyone else to see it too!  🙂

I’m finally going to share one with you today!  🙂

Rachael lives in Australia.  In 2011 and 2012 she participated in a really awesome fundraiser for the Ovarian Cancer Research Foundation called Frocktober.  The idea is for women and interested men to wear a frock for a day, a week, or a month, and get sponsored for it.

Rachael refashioned a lot of her dresses for her Frocktober blog, which you can (and should) check out right here.

Without further ado, here’s one of Rachael’s fab Frocktober pieces from her blog, Rachael’s Frocktober Challenge!  🙂

Take it away, Rachael!

When I saw this 1990s denim monstrosity at the Karrinyup Swap Meet one Sunday morning, I knew I had to have it.

“How much for that one,” I asked the bleary-eyed stall holder.

“One dollar please take it so I don’t have to cart it home with me,” she replied with urgency.

“It comes with a belt, take the belt too.”

Hmmmm, not a lot of places to go with this negotiation.

I laugh at your double denim and I give you – quadruple denim.

After I laundered the frock and threw out the belt (it was a bit gross), I got to work…. 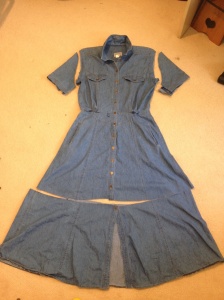 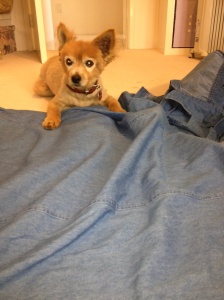 “Why are you taking that photo? If you put me in your blog I’ll kill you,” said Maxwell.

When I got to the armholes, I needed to call in someone with opposable thumbs for help. Namely Mum, because it’s been about 15 years since I cut facing for an armhole (and Mum has got mad sewing skillz). 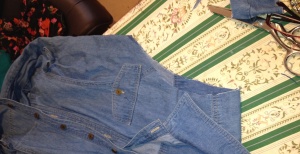 After the armholes were cut, there was some gapeage going on, primarily due to the fact some enormous shoulder pads were formerly housed in the shoulders….so there was a bit more unpicking and taking in to do.

It took a bit of work*, but it’s my most favourite $1 frock ever!

I found my denim frock to be most suitable for a luncheon today with Mr Waters. We met at Vege Mama (off Beaufort St in Mt Lawley) for kale salad and organic soy lattes.

Way-hey, look at me hipsters!

Rachael, you rock.  Not just for the cool frock and your amazingly cute pup, but for using your creative skills to help fight ovarian cancer.  Mad props to you!  🙂

Keep those submissions coming, folks!  Just because I haven’t shared yours yet, doesn’t mean I’m not gonna!  🙂 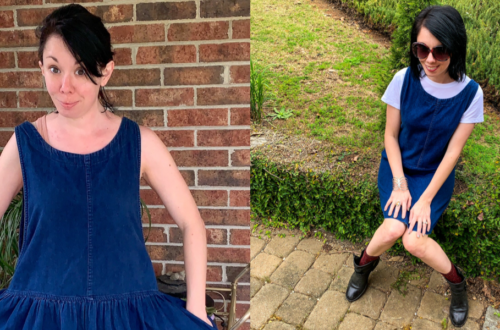 How to Refashion a Floofy Denim Jumper Dress 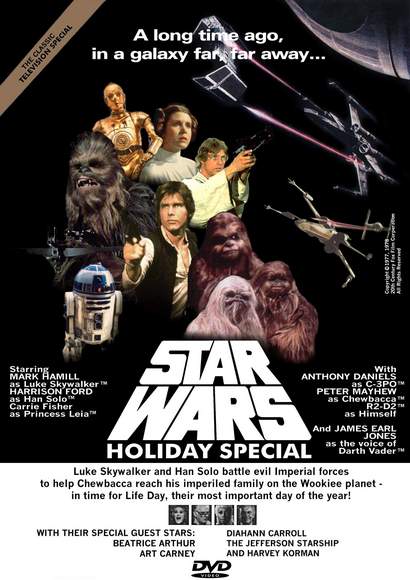 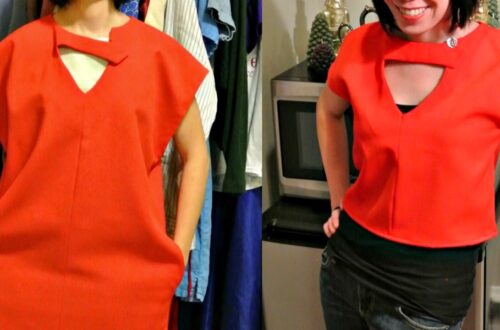 Into the Awkward: A ’60s Dress to Top Refashion