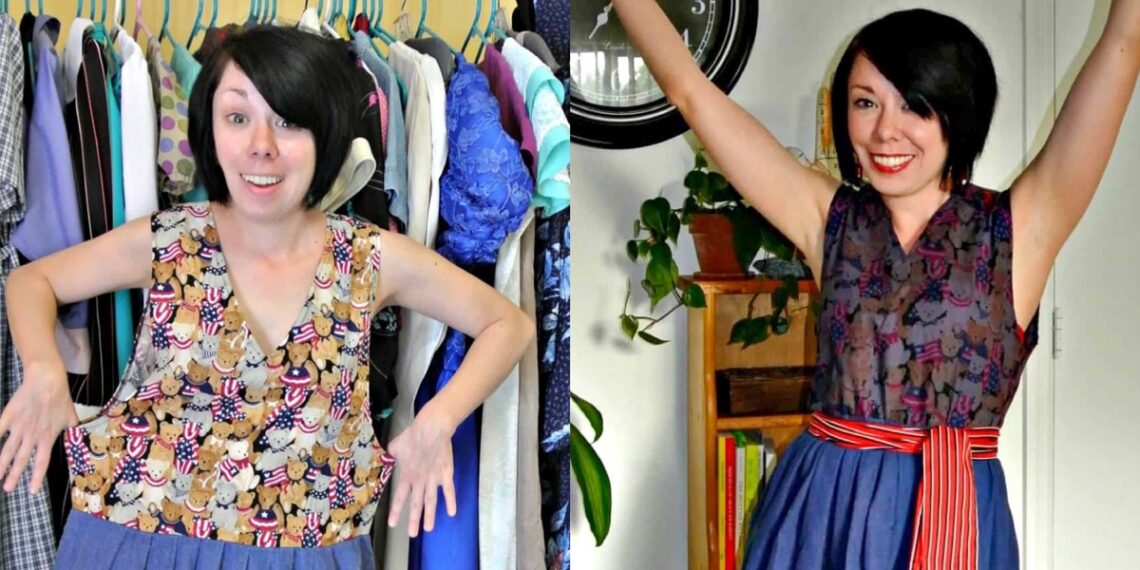 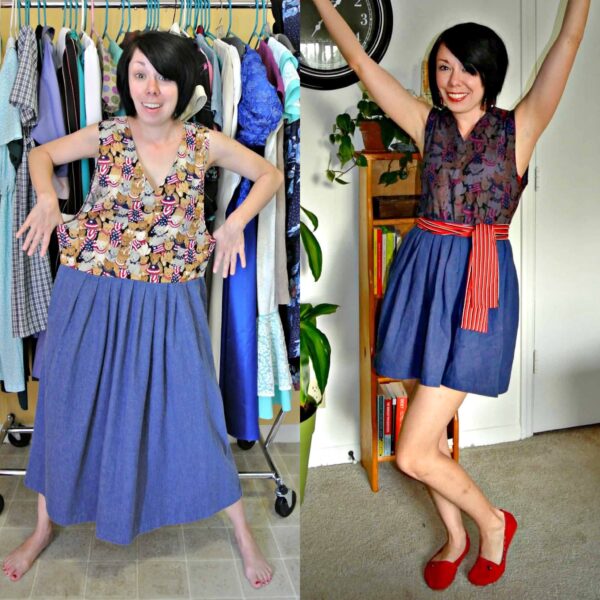 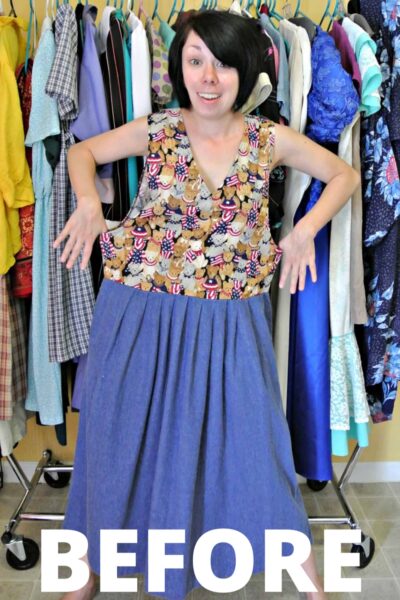 This might be the worst dress I’ve ever seen.

There is nothing to like about this dress.   Not a thing.  It’s cut like a toddler’s jumper, It’s ugly, and that print just angers me.

Even the brand name is obnoxious.

When I bought this terrible thing for $1, it was mostly to prevent anyone else from buying it and wearing it as-is (I’m a humanitarian at heart).  It’s been on my refashion rack for months and months!  But for Memorial Day, I was feeling patriotic and decided to give this “bear” (har har) of a refashion a go!

That print is awful.  There was nothing to be done with this dress that would save it unless I could put those bears into hibernation!

Luckily, I have these guys:

I wanted my new dress to have a dark blue hue, and I tossed in a bit of black to further mute the print from the top of the dress.

Into the dye bath it went!

After about 45 minutes, I rinsed and dried my dress.  Now time to get to shaping this thing up!

I knew I needed to raise the waist of this dress to make it look right.  Now…I could have detached the top part from the bottom, trimmed off some the fabric, then reattached it, but I had a quicker/more fun solution!

I folded the shoulders of the dress over and pinned them, like so:

Now that I had a better idea of where the new waist for this dress would be, I got to fitting!

First, I had to snip out those pockets…

…then I fitted my dress on my dress form.

Since this dress has no zipper closure, I had to be careful while pinning.  If I made it too fitted, I wouldn’t be able to slip into it.  Yes…I could have just added a zipper, but this really wasn’t necessary for this one.

I couldn’t get my dress off the form without unpinning one side.  No worries!  I just measured the opposite side and re-pinned the pinless side to match!

Once all my pinning was complete, I stitched each side down.

I still needed to tackle that length!  I decided to go super-short for the 1940’s pinup look I was going for.  🙂

I gave my dress a new hem…

…then went back to the shoulders of my frock.  I stitched them down along their pre-existing seams on each side.

The new shoulders were fine and all, but I thought they could use a little something special. 🙂

I hand-stitched a button to each shoulder, which took no time at all!

I tossed on a sash I scored at the dollar-a-pound Goodwill, and just like that, my dress was done!

I really ended up liking the red buttons on this one!

Philip and Amauri seemed to dig my new frock as well.

I even like those silly bears now that they’re muted a bit.  🙂

So yeah…I think this dress is pretty much full of winsomeness!  🙂

I hope you all had a fabulous weekend as well! 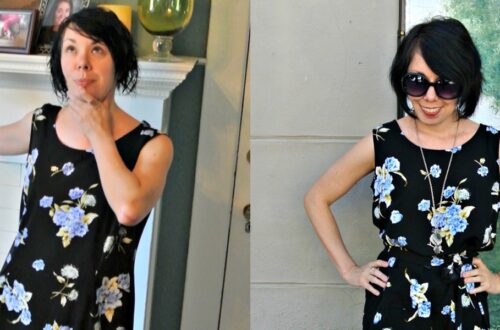 Athens Excursion: An Easy Dress Refashion (With a Pocket!) 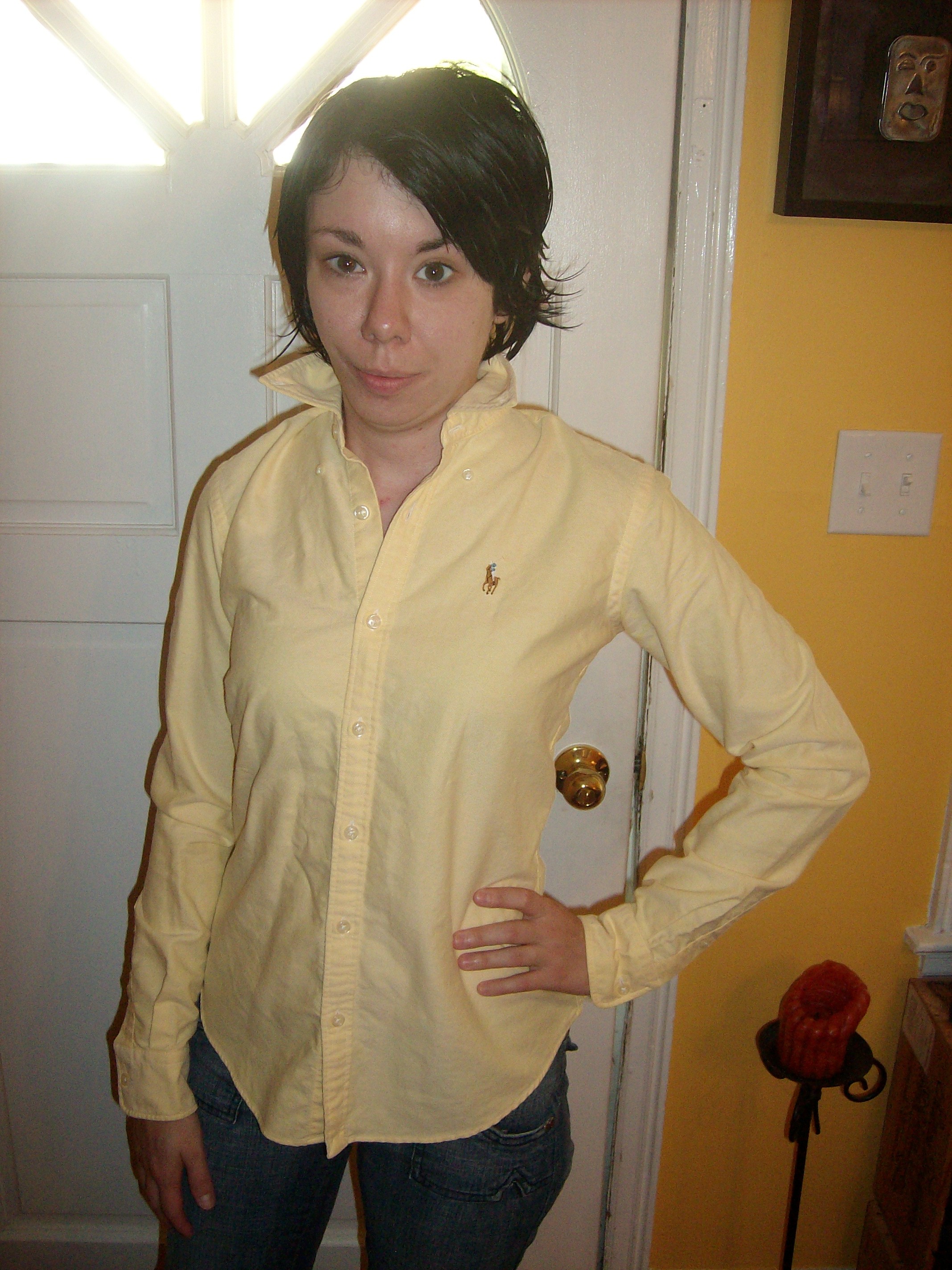 Day 5: I’ve never even been to Oxford 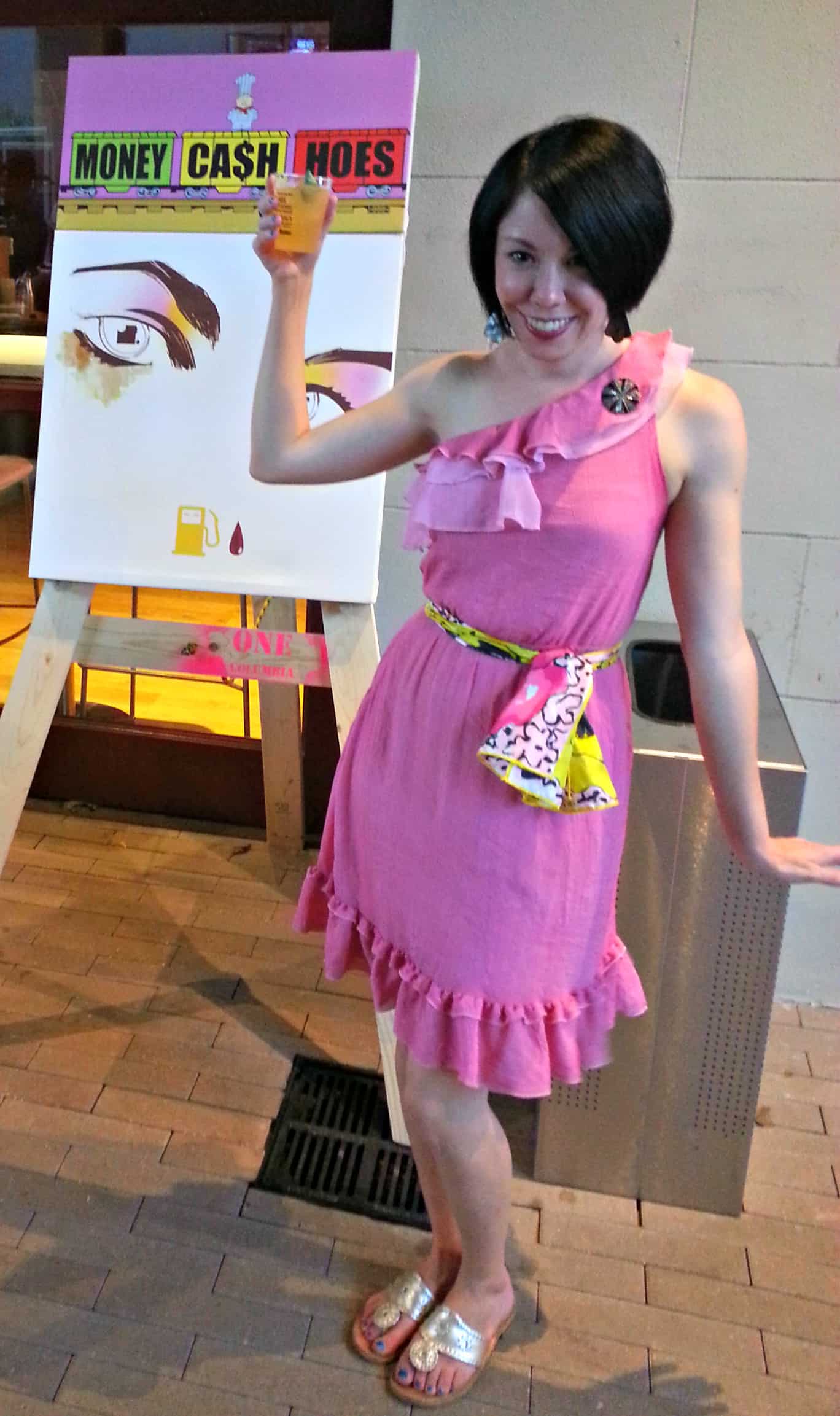 A Not Quite Red Ruffled Dress Refashion