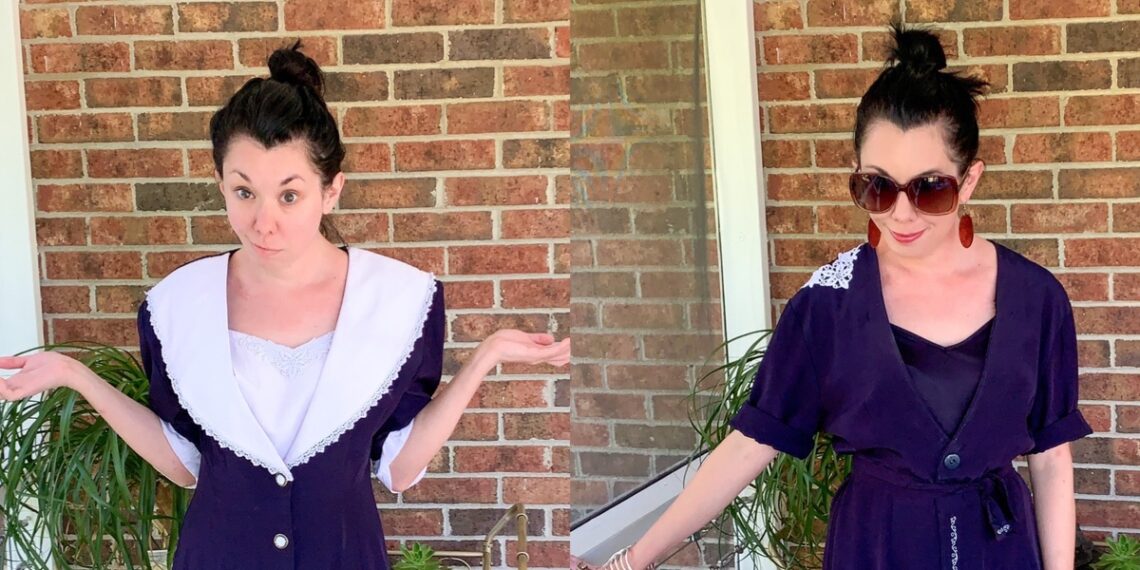 This ugly collared dress has been passed over many times when I’ve flicked through my refashion stash for a day’s upcycle.

There’s little to love about this dated $1 thrift store dress. I hate the collar, the pads, those sleeve cuffs, the buttons, and that fake camisole under layer.

Plus, when I washed it, the dye bled onto the white parts, leaving them unpleasantly splotchy (The label said “Dry Clean Only”, but do I pay attention to labels? No. No I do not).

I know…I just did a navy blue collared dress refashion, but I promise this one is totally different! I’m not here to disappoint you guys!

Let’s get this Refashion (and the party) started!

Step 1: The Removal of ALL THE THINGS

As I said above, I hate just about every single detail on this dress.

So, I got to ripping!

That collar was the first to go.

As sports are cancelled right now, I have no need for these linebacker-worthy shoulder pads.

Now for those buttons!

I used my seam ripper to remove most of them, but then noticed the bottom three were actually pinned on!

That fake under layer

Removing that fake camisole thing was a breeze, as it was simply buttoned in.

However, as I saw it laying there, I realized there was a part of it that I actually liked.

That lace detail is quite lovely when extracted from its weird camisole prison, isn’t it?

Whew! That was a lot of removing, wasn’t it?

All of that unpicking left the top of my thrifted dress looking like a bit of a mess. :/

Time to get pinning!

I carefully pinned everything back together, with the addition of one awesome little detail.

I decided I just couldn’t let that little bit of lace go! I added it to the shoulder as I thought it would be an interesting visual element.

I stitched my new neckline down.

Now that my neckline was de-collared, it was time to handle that front placket!

I now had to figure out how I wanted to get in and out of my new dress.

I decided I didn’t really want this to be a button-up dress anymore. I knew from prior experimentation that I could get in and out of the dress as long as the top button was undone, ergo I could just stitch the dress up to that point.

However, the tiny holes from where the buttons used to be were really distracting.

I decided to camouflage those tiny holes with a bit of decorative stitching.

I chose this stitch on my machine.

Here’s how it turned out!

Next, I stitched the front placket down except for the top buttonhole.

First, I pinned the placket down and chopped a bit off the bottom (this will become a sash later)

Then, I stitched the placket down!

Let’s get some closure…a new top closure that is!

I pulled these two buttons from my stash:

Since I reversed the original overlap, my top button needed to button from the inside.

So, I stitched the small brown button on the inside, and the pretty navy one on the outside (to cover the stitching and because I thought it looked cool).

We’re coming into the final stretch!

I pinned the bottom raw edge of my dress under.

Then I stitched down a new hem!

I took that bottom scrap and pinned the raw edge under once.

Then, I stitched along the raw edge with a zigzag to keep it from fraying. I know, I’m wildly inconsistent in how I make my sashes. But it’s fun to experiment!

After allllll of that, my new dress was done!

I think my refashion turned out looking quite high-end and classy! Luckily, I had a navy blue slip I was able layer underneath my new creation.

You can see how instead of cutting off the original sleeve cuffs of this dress I instead opted for rolling them up. Out of sight, out of mind!

This was definitely a very fiddly Refashion project (It took me about three hours in total), but I think it was well worth it!