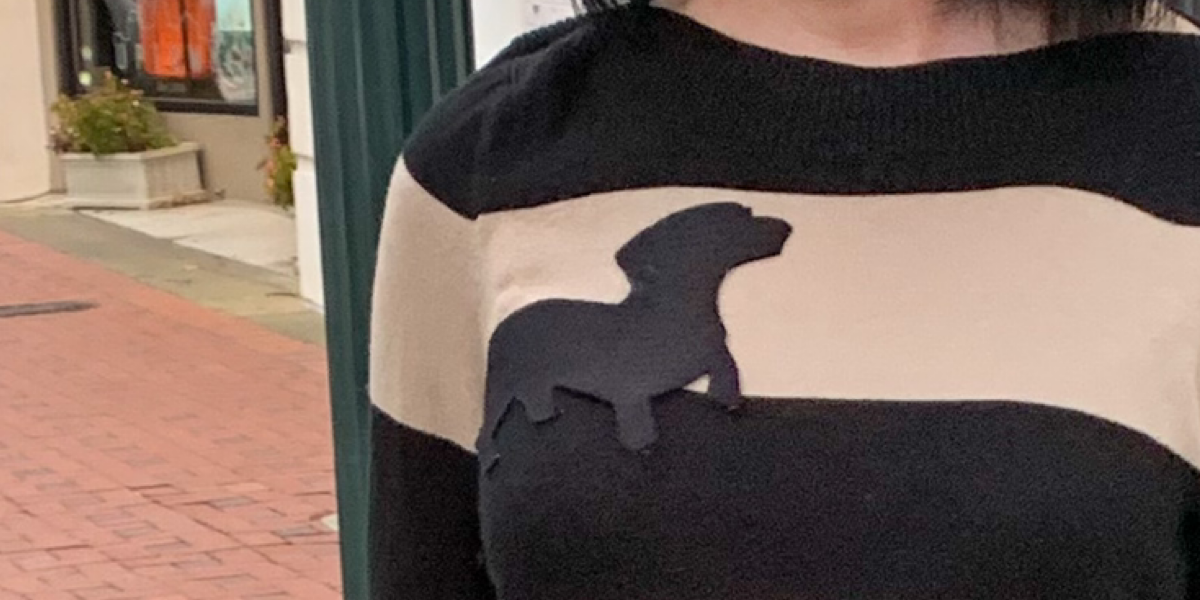 Months ago, Mr. Refashionista and I agreed to watch Erin and Ken’s two dachshunds for a week while they visited family.

This means our house is currently overrun with FOUR dachshunds.

If you have even one dachshund, you already know they’re quite a handful. Stubborn, Borky, and crazed are all apt descriptors of this breed.

But they’re also cute, silly, and snuggly enough to make one forgive their many faults. I love the lil guys.

It’s no wonder I had dachshunds on the brain when I began this refashion!

This is probably the first time this has happened in at least nine years, but my “before” shot of this one got deleted somehow when I restored an image backup after getting a new phone. :/ However, thanks to the magic that is Google, I was able to find a pic of an identical Ann Taylor Loft Beige and Black Sweater I thrifted for a $1 a week prior!

When I tried my newly-thrifted sweater on my non-mannequin body, I didn’t like it. My body is more of a pear shape, and those horizontal stripes weren’t doing me any favors.

While there is no photo evidence of this, I decided to cut off the sweater right above the pockets and hem it (you just have to trust me, okay?).

But you’ve seen me hem plenty of things before, and that’s not what made this refashion special.

I Googled “Dachshund Silhouette”, and wasn’t disappointed with my options.

I chose my favorite, and since we don’t own a printer, traced it with a felt tip pen on a piece of pattern paper.

When I was done, I was left with this:

I pinned my traced dachshund to a piece of black felt I had leftover from another project, and snipped out my new pupper!

I actually feel like using pattern paper (or tissue paper, wax paper, etc.) worked better than a printout would as it’s easy to pin to the fabric and it holds its shape with the fabric really well.

So now my cute lil doxie was cut out and ready to be adhered to my new sweater.

I cut out the flat part of a paper plate to put under the sweater where the dachshund was going to be added.

Now, of course I could have sewn this on, but I really wanted my appliqué to have a sharp & clean look to it. So instead, I opted for some really swell fabric glue.

I couldn’t get a pic of me glueing this little guy down (as I needed both hands), but the main thing to keep in mind when doing this is that a little glue will go a loooong way. You don’t want to use too much, or it’ll seep on on the sides and look sloppy.

If you have any edge pieces that aren’t quite glued down when you’re done, just use a toothpick with a dab of glue on the end to tack those parts down.

When my appliqué dried, I was ready to rock my sweet new sweater downtown with friends!

I styled my new sweater with a favorite vintage patent leather clutch, a pair of faux leather pants, and black booties.

I got loads of compliments on this refashion from people who I assume are also dog lovers. 🙂

Of course, the only feedback that really mattered was from these guys…