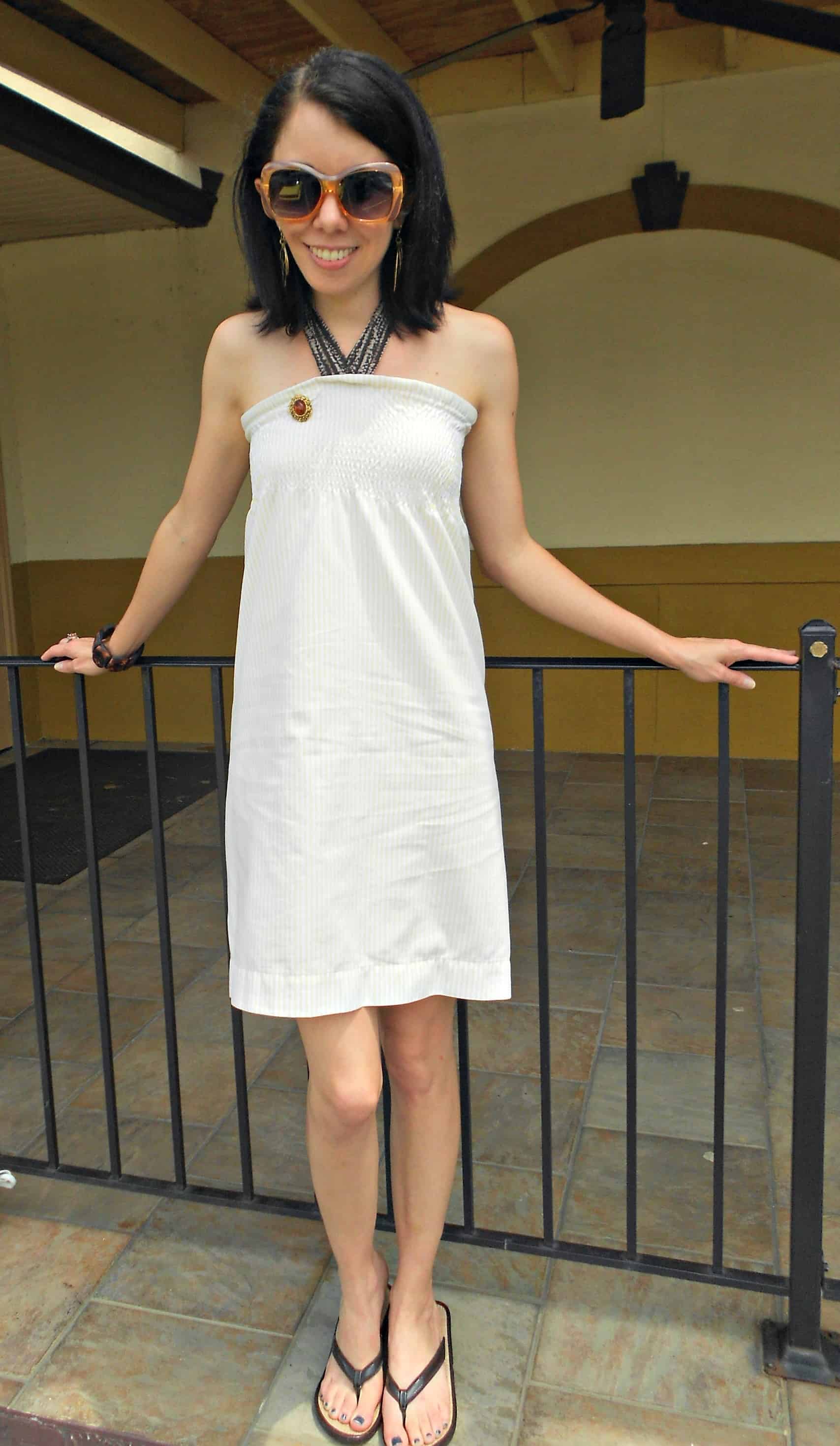 192 shares
A No-Sew Skirt to Dress Refashion for the Final Karaoke Explosion
A Few Cool Things!

Hello friends!  Did you miss me?  🙂  Well, push that separation anxiety aside!  I’m back!  Now…I’m not going to be blogging a new refashion EVERY DAY or anything (because only a crazy person would do such a thing), but rest assured…I still have many fun tricks up my refashioned sleeve to share with you!  🙂

Where to begin?  I had a delightful week off!  🙂  Lots of time to reflect and decompress!  I had a fun viewing party for my Rachael Ray appearance on Thursday night,  and slept in for most of Friday.   I was feeling pretty flippin’ awesome.  My big year-long project was done and I was just on a nationally syndicated TV show!  Life was looking pretty frackin sweet!  I was ready to get back to my day job, though! 🙂

That was until Friday afternoon, when I was awakened by a phone call from a coworker.  Our  governor, Nikki Haley, decided to veto the budget for the SC Arts Commission, thus laying off the entire staff and all operations EFFECTIVE IMMEDIATELY.

This means I have no job.

I take one week off and the agency where I’ve worked for 6 years ceases to exist?????  Honestly, I may never go on vacation again!  :/

This goes beyond me just being terrified of being out of work.  The South Carolina Arts Commission is important.  It brings the arts to people all over South Carolina, especially the poorer/underserved areas that wouldn’t have access otherwise.

During the Second World War, Winston Churchill’s finance minister said Britain should cut arts funding to support the war effort. Churchill’s response: “Then what are we fighting for?”  Think about that.  Then, read this Open Letter to Nikki Haley if you feel like it.  Then, contact your legislators if you’re a SC resident who doesn’t want to lose the arts in your communities and schools.

There may be a light at the end of the tunnel, folks.  Her veto can be overridden.  SC legislators have decided to go into emergency session on July 17th to discuss this and other vetoes.  So…I may only be unemployed for a couple of weeks, and the SC Arts Commission’s good work may be able to continue.  Let’s hope.

I started with this pillowcase I scored from the $1 a pound Goodwill.

I turned it inside-out and snipped out the side and top seams.

I folded the top seam over twice, pressed it, then stitched a new seam!

First, you’ll need some elastic thread.  I found a spool in a shoe box of vintage notions a friend gave me a few months ago.  You can find it any craft store.

Most people will tell you to hand-wind your bobbin with the elastic thread.  BUT…this might not work for your particular machine (It didn’t work for mine).  Go ahead and Google your machine make and model and the word “shirring” before you get started to see if there are any unique issues with your machine.  It could save you a few hours of cursing.  🙂  Trust me.

Load the top thread with just your normal everyday thread, and the lower thread (bobbin) with the elastic thread.  Jack up both the upper and lower tensions to their highest settings and your stitch length to its longest setting.  Now you’re ready to shirr!

Just sew row upon row of straight stitches 1/4″-1/2″ apart from each other.

It may not look super-gathered right away, but after you sew a few rows, you should be able to see it.

Once you’re done with the number of rows you want, adjust the seam you left open to make your new dress as fitted as you please.

Now…a pillowcase isn’t very big, so unless you’re pretty scrawny, this won’t work as a dress for you.  Don’t fret!  Just turn your pillowcase the other way (lengthwise), make a new top and bottom seam, and you’ll have a top instead!  No biggie!  🙂

I decided to add a halter top to my new dress.  Whenever I’m at the $1 a pound Goodwill, I always find loads of sashes that have gotten separated from their original garments, and I scoop up as many as I can!  These work really well for straps and halter tops!

I took one such sash, and stitched it to the front of my new dress.

And just like that, I have a cute new sundress that cost me less than a buck!  🙂

As I really don’t have much to do this week, keep your eyes peeled for all sorts of subtle changes to this site that will make it easier to navigate/less clunky.  🙂  I’m not much of a webmaster (or would that be webmistress?), so don’t be terrified if things look weird for a day or two!  🙂

A No-Sew Skirt to Dress Refashion for the Final Karaoke Explosion
A Few Cool Things!
192 shares