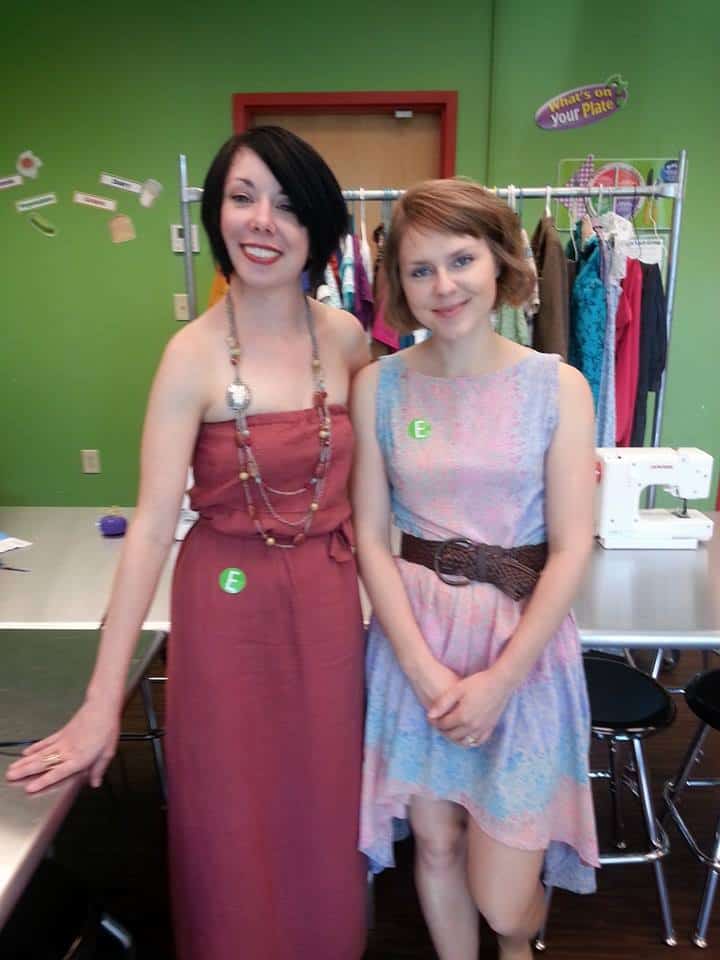 A few months ago, I was approached by the nice folks over at EdVenture about hosting a sewing class for their Mini Maker Faire.    Maker Faires happen all over the country, and are where inventors, creators, crafters, designers, developers, and other clever folks gather together to offer workshops and demonstrations to the public.

I’d been wanting to teach a sewing class for a while now, so I said yes.  But I knew I couldn’t do it alone.  Luckily, The Olive Ant (another local refashion blogger) who has been working with me on starting a series of sewing classes at our public library was happy to join me on this venture.  🙂

We set up our classroom the day before and were super-excited about the big event!  Three big racks were filled with refashionables just aching to be restyled and repurposed!

Despite the optimism of the event’s organizers, I didn’t think this was going to be a big deal.  EdVenture was great about promoting the Maker Faire and our place in it, but I really didn’t think that many people would come to our room.  I honestly didn’t think there would be much interest.

When the doors opened, our sewing studio was quickly filled with super-hyper kids and their parents.

I’m about to sound extraordinarily daft, but I thought this event was targeted to adults and maaaaaybe a few teens.  I had no idea this was a kids’ event, and hadn’t planned for it as such.  You would think that the fact that the whole shebang was being hosted at a children’s museum would have clued me in, but it didn’t.

I grabbed Kassie by the arm and pulled her aside,

“Did you have any idea this whole thing was for kids?!?” I hissed, eyeing the room in panic.

“No!  I thought it was for grownups!” She raised her eyebrows and shrugged with a look that said, Meh…guess we’re going to have to make the best of this.

I don’t understand kids.  I didn’t like them when I was a kid, and I pretty much just avoid them as an adult.  It’s easy to do.  I’ve never babysat, and most of my friends are child-free.  If a community event is touted as being family-friendly, I don’t go to it.  Every time I see a squalling brat at Target, I feel even better about this life choice.

So how, after years of successful avoidance, had I ended up trapped in a room full of kids (mostly under 10 years old) for 8 hours?

I couldn’t just leave, as we were swamped with young sewing hopefuls, and I certainly didn’t want to abandon Kassie.  But, I had no idea how to talk to these strange tiny people!

I decided to go with what I knew and talked to them as if they were all drunk artists.  I encouraged their creativity while keeping them from maiming themselves with the multitude of sharp objects in the room.

These kids were clever and wildly creative!

At the end of this extremely challenging, yet intensely rewarding day, I was helping my last pupil:  a really sweet young lady who wants to be a fashion designer when she grows up.  🙂

I hate to play favorites, but this kid was kinda my favorite. 🙂 Her mom was a terrifically patient and lovely lady as well.  🙂

I was amazed how how smart, fun, opinionated, and fearless these kids were.

So much creativity was unleashed on this very special day.  I’d guesstimate that we saw over 100 people in our sewing classroom.  Major props to Kassie for being an amazing collaborator, and thanks to EdVenture for forcing me out of my kid-free comfort zone.  😉  Also, to those of my of my grown-up blog fans that came by to say hi, let me offer an apology for not having more time to chat with each and every one of you for as long as I would have liked.  It was wonderful to see you.  🙂

37 thoughts on “Creativity, Fear, and Fun at the Mini Maker Faire!”