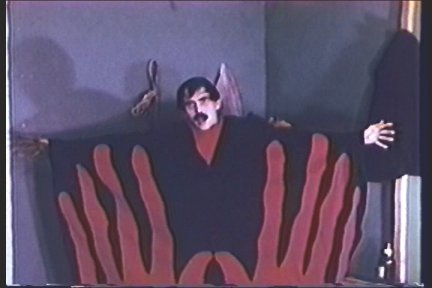 Happy Early Halloween, Everybody!  🙂  Halloween is one of my favorite holidays.  I absolutely love dressing up in costumes.  I don’t love buying cheaply made crappy costumes from Halloween Express and the like.  I’ve been making my own Halloween costumes for years, and this one was no exception!  🙂

As many of you know, I love terrible movies and cult films.  This interest is what brought me and Fella together (awwwww!).  One of our favorite bad movies isManos:  The Hands of Fate.

This film is widely regarded as one of the worst (if not the worst) movies of all time.  If you haven’t seen this atrocity, you should at least look at this little trailer here.  Inspired by this awful (really awful) movie, Fella and I decided to dress as Torgo and The Master.  🙂

I started off with a queen-sized jersey knit sheet set.  I actually had to buy these new, but they were still way cheaper than buying this quantity of fabric would have been.  I’m going to have tons of fabric left over, but don’t worry!  I’ll use it all eventually!  🙂

I also had these two nerd-tastic 2XL tees that I bought just for the fabric.

I took a large piece of paper and drew a big hand.

Then, I cut the Tshirts in two.  I cut out my hand, and pinned it to the two Tshirt backs.

I carefully cut around the hand.

I took the flat sheet and cut it to make it closer to the size I would need.  I intentionally left it really long, as that would be the last thing I was going to fix.

I folded the sheet in two, and pinned it where the neck hole would end up going.  I carefully laid out the hands and pinned them to the front of what would be my kaftan.

Then, I sewed them down.  Since I was working with jersey, I used a zigzag stitch so the fabric wouldn’t bunch up and so it would be able to stretch a bit if needed.

I carefully cut out a neck hole for my future kaftan and placed it on my dress form.

As I’m female, I don’t want to be stuck wearing some baggy kaftan all night.  Part of Halloween is making ridiculously un-cute things cute (amirite?) darnit!  To make my kaftan more fitted than frumpy, I pinned each side on my dress form, keeping it quite snug.

I ran each side through my machine.  Almost done!

My final step was to put the kaftan on and decide how short I wanted it to be.  I chopped of some of the length, and trimmed any of the jagged edges on the hands.

Now I have one of the most awesome costumes that hardly anyone will understand!  😀

Fella’s Torgo costume was pretty easy to make.  We thrifted the pants, shirt, jacket and hat for a grand total of $5.00.  🙂  He wore my knee pads from my roller derby days with fabric scraps electic-taped to them to get Torgo’s signature Big Knee look.  🙂

Did any of you guys make your Halloween costume this year?  Care to share it with me?