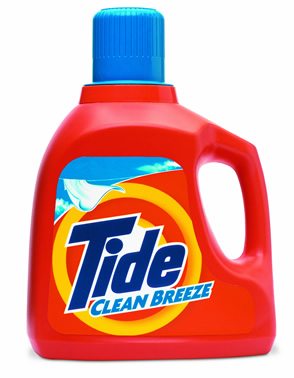 By now you’ve probably figured out that I’m fairly friggin frugal.  🙂  I came to the decision to start making and remaking my own clothes when I walked by an expensive dress shop and thought, “Hey…I can do that!”  Since then, I’ve been looking at other things I think I pay too much for that I could probably make for myself.

One of these things is Laundry Detergent.  Fella and I pay just under $10 for a bottle of Tide about every few weeks (we do a LOT of laundry).  This is silly!  We’re saving for a wedding!  We don’t need to be tossing our hard-earned dough out the door!

As an avid couponer (ah yes…there is no end to my cheap-assedness!), I can tell you, there really aren’t that many great deals on laundry soap out there.  :/  Plus, we don’t have space to stockpile the stuff.

I started researching different ways to make my own.  I opted out of making a liquid detergent.  All that soap boiling and slime making didn’t sound that fun.  Plus, I’d have to find a place to put FIVE GALLONS of the stuff!  I decided to go with the easier powder detergent recipe that could make a smaller batch.

Here’s what you need.

If you’re doing this at home, make sure you get washing soda, not baking soda.   Washing soda has a higher alkaline content.  Make sure you don’t get the Biz detergent, but the stain fighter.  Here’s where I deviated from most recipes: I used Biz instead of Borax, because I thought it would be less harsh on my clothes, but still fight any stains.  I used a bar of Dial soap instead of Fels Naptha laundry soap because I liked the smell better (Mmmmm!  Springtime Fresh!).  The only thing you’ll want to remember is if you’re substituting soaps, don’t use the kind with moisturizers in it, as you don’t want to lotion your clothes!  🙂

The first step in this process is to grate the bar of soap.  I used my awesome food processor, so this took about 5 seconds.  Here’s what it will look like when you’re done.

Next, add 1 cup of Washing Soda and 1 cup of Biz to the shredded soap in your food processor (or blender, if you don’t have a processor) until all the bits of soap have been ground into powder.

That’s it!  You now have your own laundry detergent!

You’ll want to use less of this soap than what you’re used to.

If you’re like me, you’ll want to peer in your machine to see how your new detergent is working.  Don’t worry when you don’t see any suds.  This detergent is sulfate-free (it’s the sulfate that makes the suds in the store-bought stuff), so you won’t see any.  Don’t fret!  Your duds don’t need suds to get clean!  🙂

So…How does it work, you ask?  Great!  I did a big load of darks to test my new soap, and they came out super-clean and smelling great!  I wash everything with cold water, and there was absolutely no residue on anything.  I would definitely say it works just as well as the expensive stuff.

I’m really excited about how well this worked and how easy it was.  For $6 in supplies, I have enough detergent to last us for months and months!  AND it doesn’t have as many additives as store-bought detergent.  🙂

What fun things have you learned to do for yourself lately?