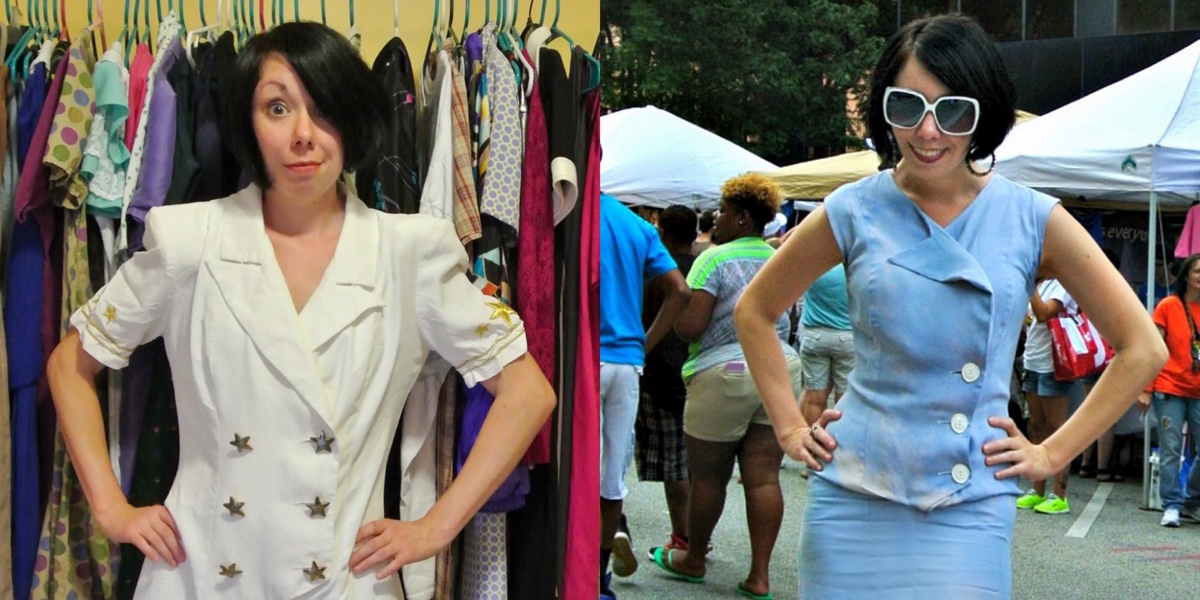 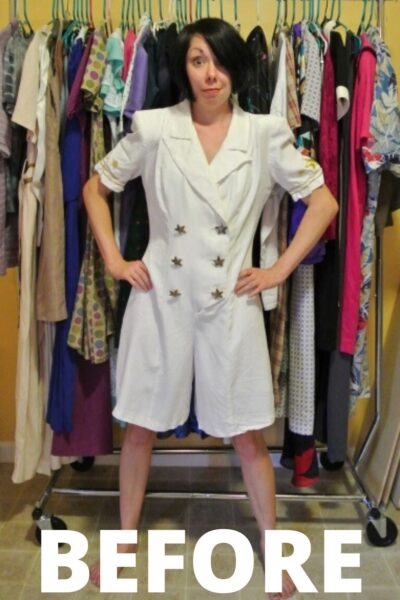 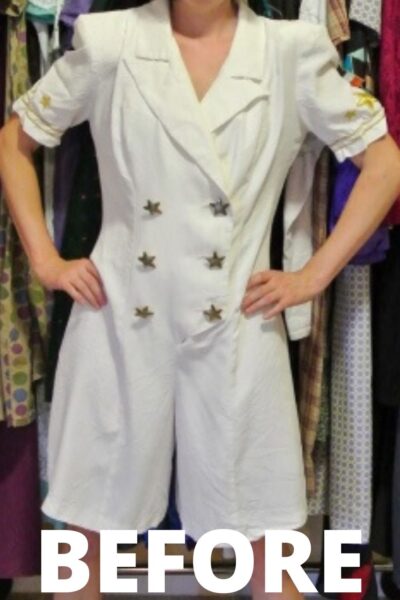 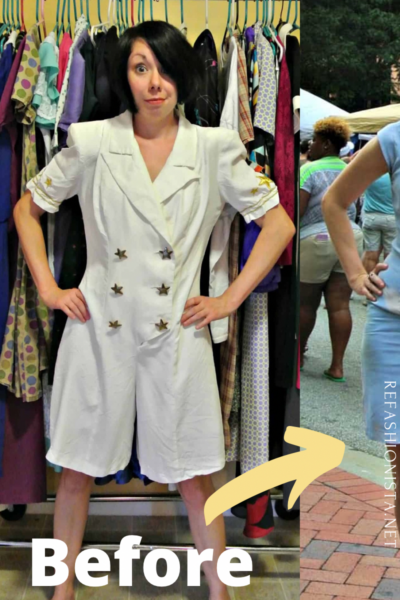 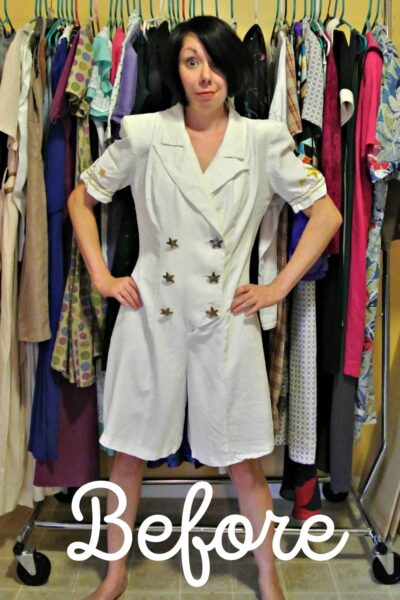 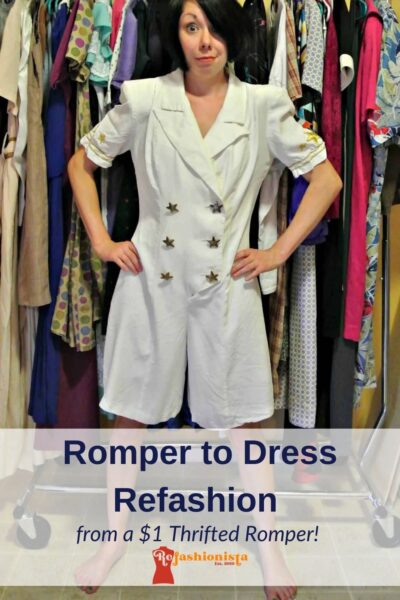 Hey Everybody!  I know, I’ve been absent for about a week now, but you know I’ll always come back to you, right?

I was just feeling like I hadn’t been spending enough time with my friends, so I took a little break to relax.  Everybody needs a breather every now and again, right?

What follows is probably THE MOST frustrating refashion I’ve ever done, and a testament to my lunkwilled stubbornness.

It all began with this nautical number right here:

Had I found this a few weeks ago, it would have probably ended up being my dress for the Yacht Rock soiree I attended awhile back.

Sadly, I had no use for this nautical look. :/

A close inspection of those star buttons revealed they were in pretty bad shape, so I removed them.

I also got rid of those giant shoulder pads!

As most of you know, I HATE wearing white (It only serves to bring out my ghastly pallor).

So, I tossed this frock into a nice, hot dye bath!

This is where things started to go awry.

This dress is a ramie/rayon blend.  Ramie takes dye.  Rayon does not.  This means that I knew I would only be getting a subtle blue out of this.

The darker bits are where a stain was that I didn’t notice in my initial examination of this dress.  They were super-noticeable and only on that one spot.

I almost gave up right then.

Before scrapping this refashion altogether, I decided to try to dab on a bit of bleach to the spots…

Yeah…that didn’t quite work out.

I was so close to giving up.

I took the bottles of dye I had used and splattered random bits of dye on the dress and left it in my sink overnight.

When I rinsed it out, I discovered that the splotchy dye hadn’t set at all.  I was back to square one.

I filled a pitcher with a bleach-water solution and wadded the dress up inside it.

I figured that if I made the rest of the dress uneven, those splotches might look intentional.

Guess what?  It worked!  HUZZAH!

I was still far from done.

I found some cool buttons in my giant stash, and sewed three onto my dress.  I decided to just leave off the functionless buttons on the left side.

I grabbed my seam ripper and got to work removing the sleeves and collar.

Next, I unpicked the front and back seams of the crotch.

All this unpicking left me with some rapidly-fraying raw edges to deal with.

I put what was about to be my new dress inside-out on my dress form and pinned the unpicked legs into a skirt.

I stitched this down and cut off the extra fabric.

…and stitched those down too.

I took in each side to make my frock perfectly fitted, like ya do.

When I tried on my new dress to see how it was shaping up, I was alarmed to see a little something extra I hadn’t planned for…

It was awful.  After all that work on this extremely frustrating refashion, I had somehow ended up with a suspiciously bulgy-crotched frock that there was NO WAY I was going out in public in!

I almost gave up.

But then I took the bulgy area, folded it under and pinned in from behind to do a weird faux 2 piece thing that I think really looks quite awesome.

And now, BEHOLD!  The most annoying refashion I’ve ever executed!  🙂

I actually love this.

I wore my fancy new frock to SC Pride, where I made some new friends!

I had a blast with my friends, who all thought my dress was pretty swell.

Dan and I even enjoyed brandy and cigars on a patio!

Such a lovely day!  And I’m SO very very happy I didn’t give up!

Do you find yourself stuck on a refashion like this every now and again?  How do you get over the “I really don’t want to do this anymore” hump?