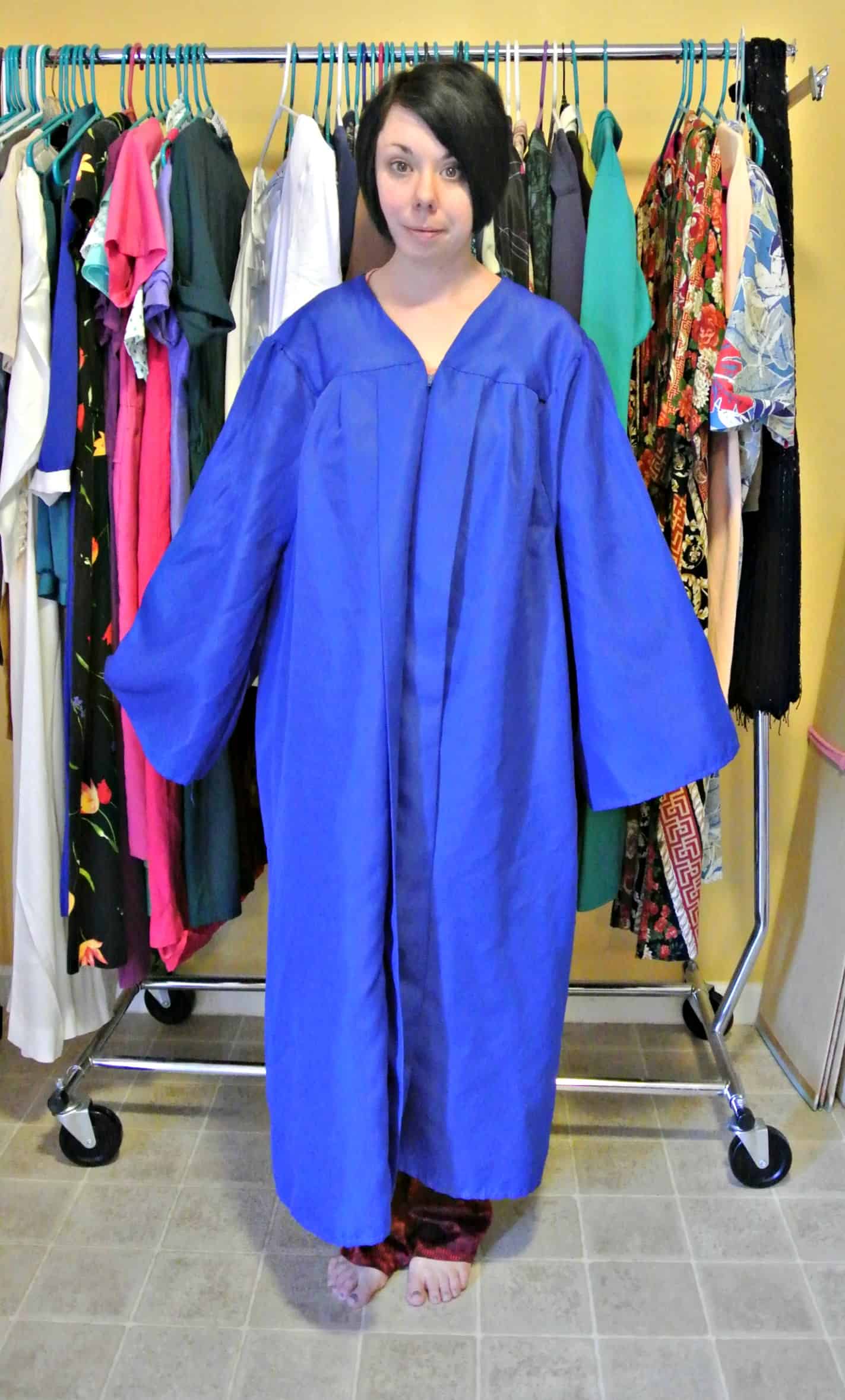 809 shares
What to do with an Old Graduation Gown: Upcycle it into a Dress!
DIY Peplum Top from Frumpy Dress

When I haven’t posted in a while, it usually means one of two things.

I was really, really fantastically happy.  I just started my awesome new job I really like with coworkers who are just awesome.  My friends and I were having awesome times together. I was in a relationship that I felt happy and fulfilled in with someone I deeply cared about and was starting think, “Wow.  This is my favorite person.”

Than lousy shit started happening.  I had to revert my house hunt to a rental hunt when I realized my car was about to die and therefore financial reprioritizing was in order.  Finding a rental here in Columbia that’s in a safe location without holes in the walls that will allow my little Douglas to live in is pretty much the most impossible quest I can imagine at this point.  If you’re up for an exercise in futility and depression, go ahead.  Do it.  If you want to raise your stress levels to entirely new & exciting heights, arrange viewings every day during every lunch break as well as every day after work.  Sit at home every night scouring listings that repeatedly say “Absolutely NO Pets Allowed”.  Mark, in an attempt to cheer me up, said, “At least you can’t feel any worse than you do right now.”

Never say that.  Things can always get worse, and in my case, rather frequently do before they get better.

Then Mark and I broke up.  It was awful.  Imagine seeing the person that you care about more than anyone staring at you blankly and telling you they didn’t want to be there for you anymore.  And seeing the body language that told you they just don’t care anymore and really just want you to leave and for all of this to be over.  I’ve never felt so hurt, unlovable and expendable.

The next night, my car died.

The next day I woke up to discover my hot water wasn’t working.

After a good cry in a cold shower, I went in to work where a very sweet coworker asked how my house hunting was going.  When I told her, “Not so well.”, She responded with, “Well…at least you can drink wine!  I gave that up for lent. Just trying to put a positive spin on it.”  She was being really nice, and I was probably a callous jerk for saying, “You know what I’m going up for Lent?  Putting on a positive spin on things when things are just plain shitty.”

My friends ask me how I’m doing, and I want to say “Fine” and “It’ll all be okay.”, but that’s really just not where I’m at right now.  More observant followers of this blog will notice a few things.  You never see a single post with my family in it.  Why do you think that is?  I’ll also go for weeks on end without posting.  When you read someone’s blog like mine, you don’t see everything that’s going on.  That’s why when sometimes I get comments like, “You always seem to have such a great outlook on life.” it gives me pause.

I’ve struggled with depression and anxiety for as long as I can remember.  Most days I’m great.  But then some days are just awful.  It’s just always been that way since I was a little kid.  I’m one of those people who have to try really really hard to be happy.  And sometimes, especially when things seem really awful, I can’t do it.  And I hate that about myself.

I don’t usually run on about breakups, because, frankly, they’re usually not a big deal to me.  Just minor bummers with guys who never made it my my “Important People” list.  It hurts to think that maybe that’s all I was to someone else.

So.  There you go friends.  Your ReFashionista is going through a tough time, and can use all the good vibes she can get right now.

But what the hell?  Let’s do a refashion!

This is one of those, “I seriously just tied something around myself” ones, but given what I’ve been through, please keep the negative comments to a minimum, okay?

When I found this graduation gown for $1 at my local thrift store, I decided to give myself a fun challenge.

Then, things got really lousy, and I said, “Eff it.  I’m not sewing today.  The world should just be thrilled that I got out of bed and clothed myself at all.”

I didn’t want to be alone, so I spent the day with friends.

I even faked a few smiles.

So yay.  A refashion.  I promise I’ll actually do a sewn version of this one as well. 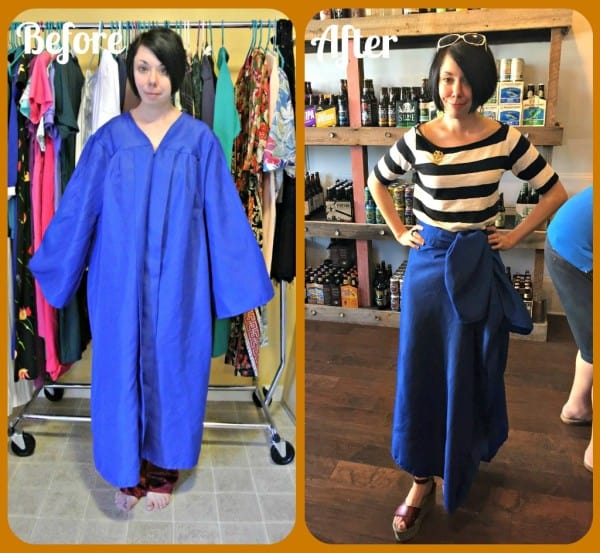 And now I’m just going to leave you with this:

What to do with an Old Graduation Gown: Upcycle it into a Dress!
DIY Peplum Top from Frumpy Dress
809 shares