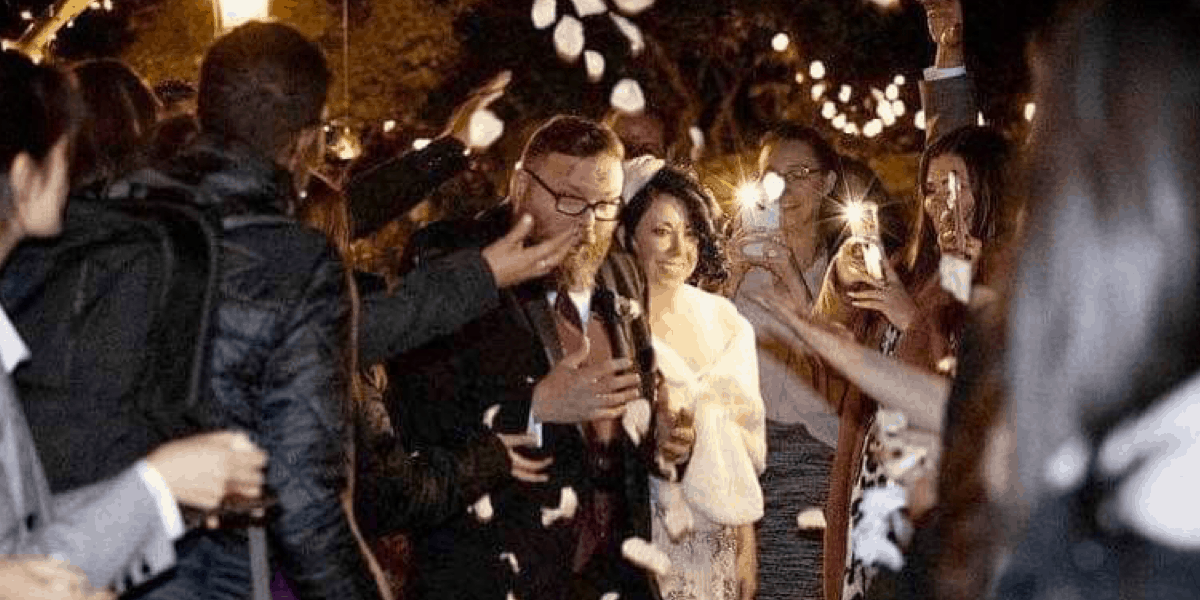 1.8K shares
Welcome 2020: An '80s Dress-to-Cocktail Dress Refashion
Thrift Stalking: How to Thrift Like a Savage

Well…here we are. 2020. A new year AND decade. Just to manage expectations, today’s post is not a refashion (but I will be posting one tomorrow).

I know…it’s been a while and I’ve been terrible about keeping in touch. I could bore you with the myriad reasons for my absence from the blogosphere as of the last couple of years, but let’s keep this post short and sweet, as we have a lot of ground to cover.

A few big things have happened since last we spoke.

I’m married now.
Yep. On our two year anniversary, Brian proposed to me and I said yes. 🙂 As our wedding planning began, we quickly realized just how expensive even the simplest of weddings actually are.

That’s why, on a lark, I entered the UofSC Love Story essay contest from my alma mater to win a free wedding on the last day they were accepting entries.

Not to brag, but I’m a not-too-shabby essayist. 🙂 Our wedding was planned and put together by 30 students in two months. The whole process was exactly what you’re thinking it was.

We were so honored to be chosen, and I’ll probably eventually write a post about what it’s like to have a class of students completely take the reins on planning your wedding (if you’re into that sort of thing). It was an incredibly fun process and the students did an amazing job. It was a wonderful day. The best day. We love each other so much, and being surrounded by our dearest friends and family while promising to continue choosing each other was just indescribable joy.

I didn’t get to make and/or refashion my dress, as it was provided by a local wedding dress shop (the rules for accepting the free wedding were strict, friends), but it was nice to not feel the intense pressure I would have felt had I decided to make my own. Don’t worry. I’ve made and will make plllllenty of dresses in my lifetime. We’re good. My reception dress was given to me by my bestie Erin, who originally bought it for her wedding, but never changed into it.

“You have to wear it. One of us has to eventually wear this. It’s pretty! DON’T forget to change into it!” were her orders.

Douglas has a new little brother.

Look at these adorable bubs.

Meet Benson. We adopted him from Little Paws Dachshund Rescue right after our wedding. He’s five years old, and spent most of his life as a breeder dog that was eventually dumped off at a shelter severely underweight with pneumonia because some people are garbage.

Benson is content to be removed from his previous lascivious lifestyle and is now happy, healthy, and a total cuddle bug that you’ll be seeing lots more of (along with Douglas, of course!). He is literally snuggled up with me on the couch as I write this.

Sad things have happened as well. Douglas suffered a spine injury that led to paralysis followed by surgery and months of intense physical therapy. He’s completely fine now, but Brian and I hope to never go through anything like that ever again.

It’s nice to be back. I can’t believe this blog has been in existence for almost ten years. It’s been a decade of so many transformations (not just talking clothes here, folks), wins, losses and opportunities to grow and challenge myself.

In 2020, you can expect to see many posts (far more than you’ve been accustomed to over the last two years). Refashions, thrift style inspiration, and anything else I find interesting will eventually land here.

It’s good to catch up. I can’t wait to share my latest refashion with you tomorrow. Even though we haven’t talked in a while, I think we’ll be able to take up right where we left off.

Welcome 2020: An '80s Dress-to-Cocktail Dress Refashion
Thrift Stalking: How to Thrift Like a Savage
1.8K shares