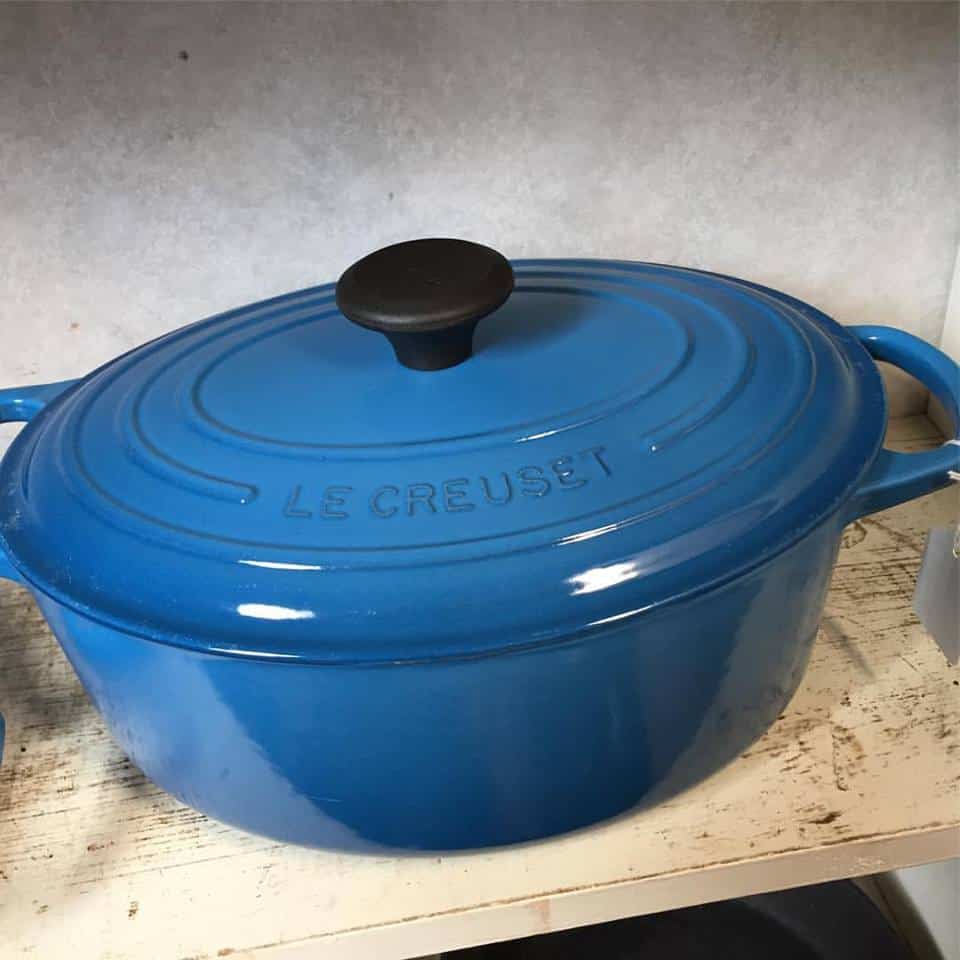 I am an aggressive thrifter. I know this. Decades of experience have helped me hone this skill into something that is almost an art form. I know which days to go to which stores. I know how to thrift a store in 15 minutes. I even have a weekly thrifting schedule.

Other avid thrifters get it. It’s all about the thrill of the hunt.

December was a month of culinary thrifting miracles. I found tons of Fiestaware, seemingly everywhere I looked. I scored a KitchenAid mixer for a song and I even found my own personal holy grail….er…holy dutch oven.

I have wanted a Le Creuset dutch oven for at least ten years, but just couldn’t bring myself to buy one. $200-$300 is a little steep for a pot. Even an amazing pot.

Then, one day, I saw the above photo on Facebook by April Blake (a fellow Columbia blogger) in my newsfeed.

Wait…what?! My brain struggled to cope with two facts revealed in this status. First, there was a Le Creuset less than half a mile from my office priced under $40. Second, it looked like April might not want it.

My breathing became heavy and frantic. Think, Jillian! Think! I imagined April Blake standing in front of this Le Creuset contemplating a purchase. Maybe she already had one. Maybe she hated the color blue. All that mattered was that maybe there was a chance she’d opt for nah rather than jumping on it.

I bolted out the door and sped to Old Mill Antique Mall.

This is a large store, and there was no time to waste. Others had already begun chiming in on April’s status with sentiments like, “If you don’t want it, let me know and I’ll get it.”

Like hell you will, I thought, my eyes narrowing to slits.

According to April’s photo, the Le Creuset was on a white shelf. Okay…that narrowed things down. I power-walked through the store, pausing only to glimpse at white shelves, searching for that telltale marseilles blue.

It wasn’t on the first floor. Starting to feel a little defeated, I nonetheless went upstairs. And there it was.

I may or may not have squealed a little.

I snatched it up, paid for it and drove back to work with a huge grin.

“THANK you for the tip! I’ve wanted one forever!” I happily commented on her photo.

Little did I know.

“That wasn’t a tip, Jillian,” one of her friends commented.

I scrolled up through the thread and saw a post by April that made my heart sink a little.

What could be done at this point? I could, obviously, message April and tell her that she had dibs and offer to give it to her, but…I wanted it. I really really wanted it. I traced my fingers over the raised letters over and over again…feeling unable to part with the object of my desire.

And c’mon. Thrifting is not a game. How could anyone blame me for taking advantage of such an amazing opportunity?

Over the next couple of days I couldn’t quite shake a nagging guilt that just wouldn’t go away. :/ I finally messaged April and offered to bring the Le Creuset to her, because I honestly felt it was hers for the taking.

I’m happy to report she’d since decided she didn’t really need or want it. Or maybe she was just being nice.

At least it’s going to good use?

And at least April is a fantastically good sport. 🙂

What do you guys think? Have I become a thrift-obsessed sociopath? Should I calm it down a bit in the future?