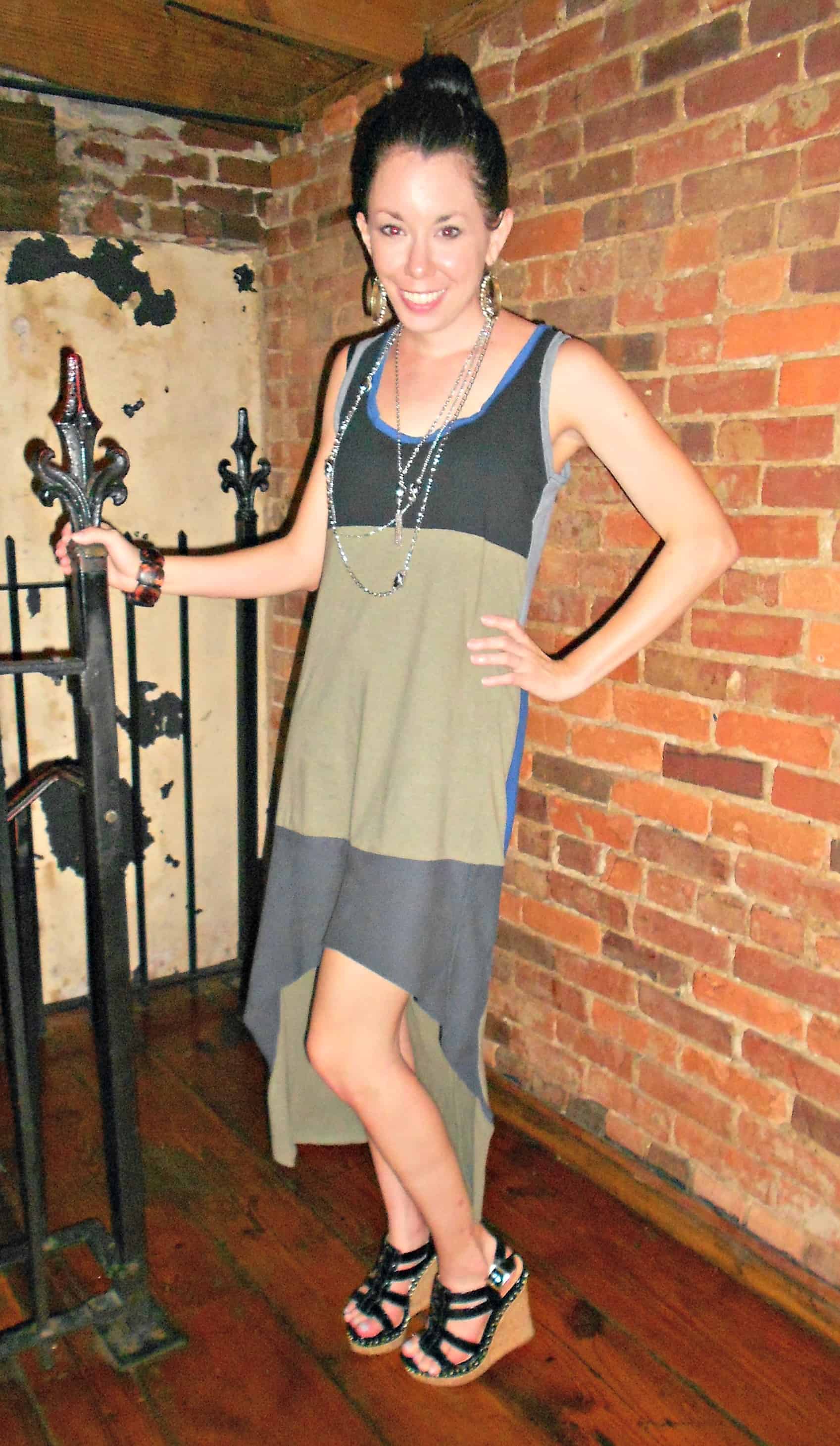 I’ve returned!!!  Cue the trumpet fanfare! 🙂  So…wow I haven’t posted in a while!  Without a daily deadline pushing me along, I’m beginning to understand those of you who have told me that they’ve pulled their sewing machine out, but just don’t know where to get started.

That’s right.  I’ve been experiencing a big mondomclargehuge case of refashioner’s block!  :/  I think it goes back to the old adage said to writers who ask, “How can I make myself write every day?”.  The answer is “Write every day.”  I really need to get back to doing a least a little sewing every day to keep in a groove.  🙂

To get out of my funk, I’ve been surrounding myself with as many creative and inspiring people as possible.  That’s right…when my creative energy gets low, I like to feed off the creative energy of others (Mwahahahaha!!!)…not unlike a leech or a vampire bat.

Today’s refashion is a departure from a lot of what you’ve seen me do.  I started with 6 XL men’s Tshirts that were donated to me.

I actually only had five donated shirts.   As some of you have suspected, I’m seeing a new gent.    New Gent lives out of town, so we mostly just see each other on the weekends…Juuuust like that lady on the food network in the Hamptons!!!

Anywho…Gent left a tshirt behind in his last visit that he mentioned he didn’t like very much– so I snagged it for my own nefarious purposes.   Seriously…never trust a refashionista!  😉

I took each Tshirt, and cut it under the arms, like so:

I cut them open at the torso as well.  Then, I stitched them together in threes, using a zigzag stitch!

When sewing these together, I made sure they were all facing the same way,  so some of the tees wouldn’t stretch more than others.

This year is all about expanding my skills and trying new techniques.  As most of you guys know, I don’t really sew with any patterns.  I’ve always found them tedious and a pain in the ass…

Til now!  🙂  I’m actually getting bored with my usual refashions, so It’s time to branch out a bit!  I found this pattern for pretty cheap on the BurdaStyle website.

I almost didn’t choose this one.  Usually in fashion photography, if someone is standing weird or is covering up the garment they’re trying to sell, there’s something wrong with it.  I don’t know why they chose to put a vest on this chick and hide what the top of the dress looks like.  I went ahead and chanced it!

First, I assembled my pattern.

I cut out the pieces and pinned them to my Tshirt panels.  This is a really simple pattern, so there were only two main pieces.  🙂

I followed the instructions provided as to the order in which everything needed to be sewn together.

Next, I needed to use bias tape around the neck and arm holes to keep everything from getting stretched/worn out.  I used the leftover bottom hems from my Tshirts instead!

This saved me a good bit of time, as I didn’t have to iron them down.  🙂  Since it’s cotton jersey, it doesn’t need to be cut along the bias to make it stretchy.   I decided to leave the outside edges of my non-bias tape raw.

I sewed my unbiased tape around the neck and arm holes, then I stitched down the sides!

Do you like my new machine?  🙂  It’s a gift from my mom.  🙂  This is the very sewing machine I grew up watching her sew on!  It’s as old as I am, and it is AMAZING!  Don’t be fooled by its age…this machine is a HUGE upgrade from my old (er…new) one!  I plan on keeping it forever!  🙂

Now my Tshirt dress is all done!

The back looks pretty spiffy too!

I think I actually like my version better than the original!  🙂