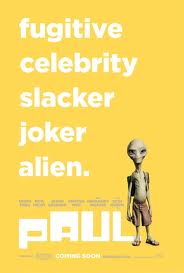 Woo hoo!  Warm weather has arrived, and it doesn’t look like it’ll be leaving anytime soon!  Bring on the sweltering summer heat!  As long as I have a car with functioning A/C, I’m fine!  🙂

Tonight was a movie night for me and the fella, so I wanted something pretty and casual.

Okay…there is nothing wrong with this skirt.  It fits okay, and it’s a pretty print.  It has a drawstring on the side.  It only cost me $1.  What more could I expect from it?  Logic told me to be content with said skirt, but I just wasn’t feeling it.

Sooooo…I wore it as a fun dress instead!

This was a totally no-sew refashion!  All I did was move the left side to my front, then tied it around my neck.  Easy!

I was super-comfy for an evening with Paul. 🙂

I’ve been looking forward to seeing this movie ever since I heard it was in production.  Everything Simon Pegg and Nick Frost touch turns to funny!  That being said, this movie just wasn’t nearly as clever as their other films.  Paul delved all-too-frequently into the realm of “stupid funny”.  Still, it was fun, and we enjoyed it.  🙂