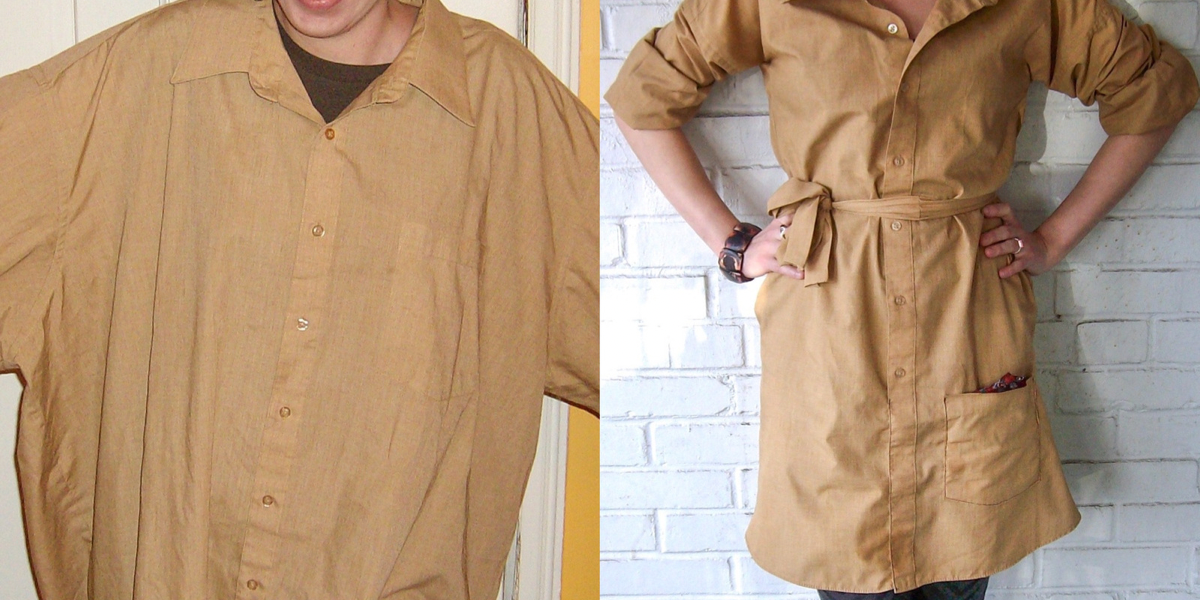 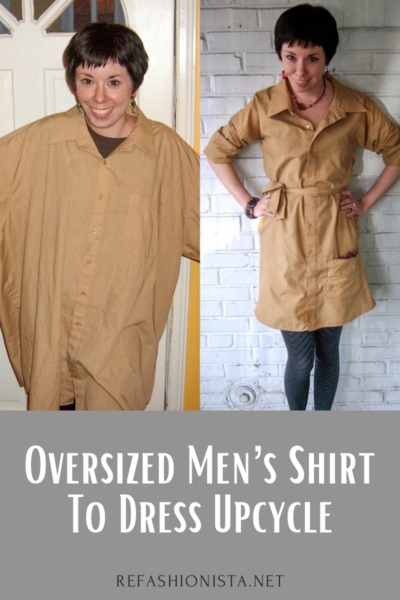 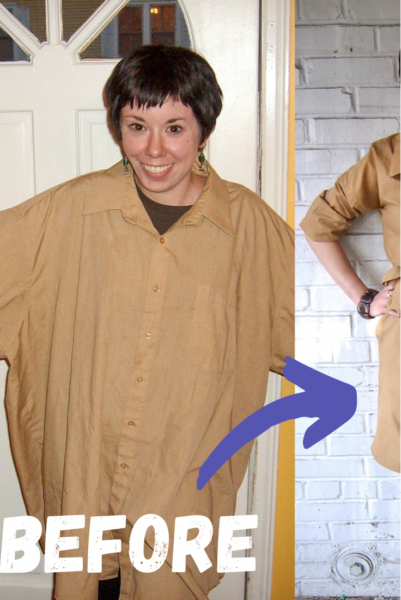 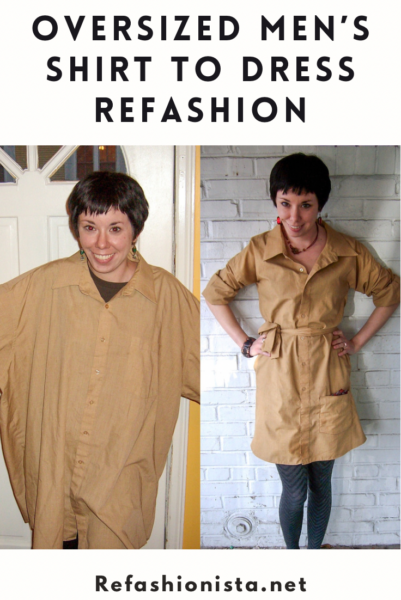 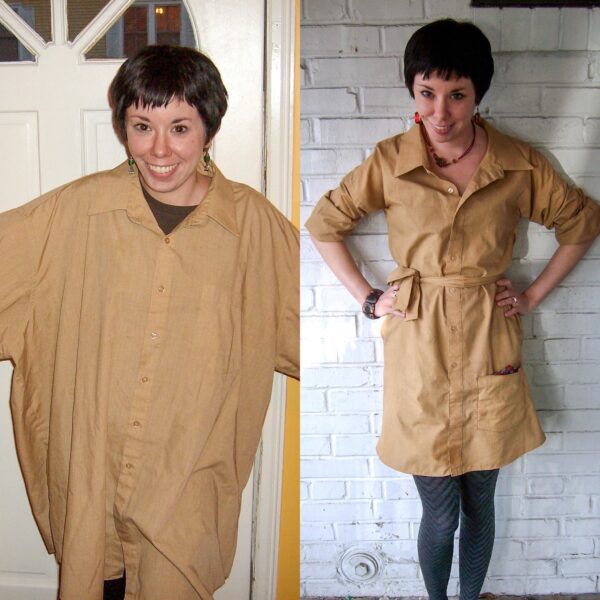 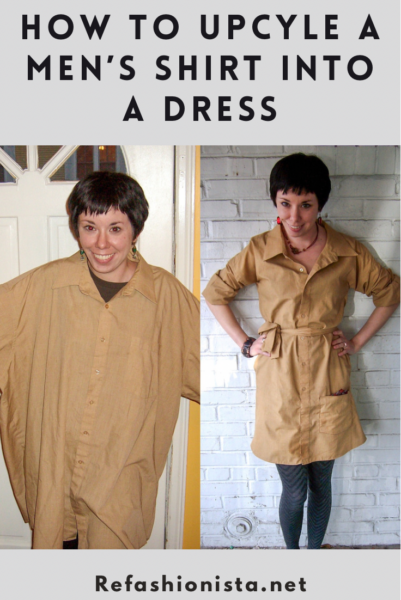 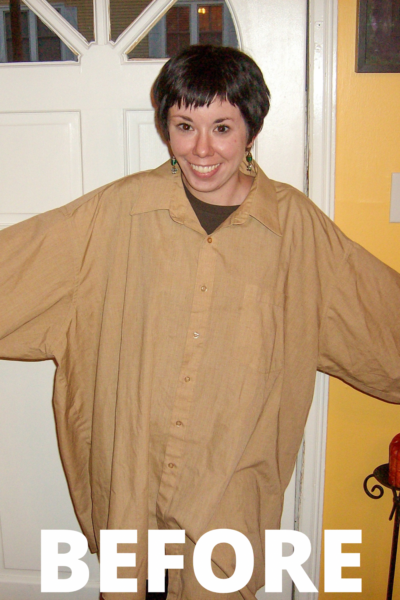 When I bought this rather large men’s shirt (size 4XL) at the dollar-a-pound Goodwill, I had no idea what I would end up doing with it.

I figured it was worth buying  just for the fabric.

This shirt sat in my “before” pile for about a week before I came up with an idea of how to use it.

I finally decided to upcycle this men’s shirt into a cute shirt dress!

I’ve been seeing/coveting them in stores lately, so why not?

First, I used my seam ripper to remove the breast pocket and put it aside.

I couldn’t keep it where it was, as a seam would end up going through it.  Don’t worry!  It’s coming back later, I promise!

Now, I had to begin the taking-in part.

I put the shirt on inside-out and pinned it at my underarms (where the new sleeves would start), bust, waist, and hips.

When taking something like this in, keep your estimates conservative. You can always go back and tweak it more, but it’s much harder to add fabric back on once it’s cut!

I took the shirt off and marked in chalk where the pins were, using my measuring tape to keep each side even.

Then, I drew a chalk line between the points to give me a better idea of the shape.

I pinned along each side directly on the chalk line, being careful to keep the fabric smooth.

Next, I carefully ran each side under my machine, making sure the fabric didn’t bunch up, which it realllllly wanted to!

I used my pinking shears to trim off that excess material.

I tried my shirt/dress on and discovered it was still a bit too big up top for me.

I put it back on and pinned the arms, bust, and waist a tad more to give it a curvier shape, ran it through my machine, and cut off the excess material again.

Remember that sad, neglected pocket? I pinned it near the bottom of my new dress.

I love pockets, and would hate to see this one go!

I used a contrasting maroon thread to sew it on.

Now…my new dress was fitting much nicer, and was made even better with its new pocket.

However, I wanted a nice sash to cinch my waist, and give my new safari-style dress a bit of flair.

Luckily, I had plenty of leftover material from the sides of the original shirt.

Then, I sewed them to each other, keeping the raw edges tucked in, like so:

Now, I had one, long strip of fabric.

I pinned the long ends together, with right sides facing each other.

I ran this through my machine, making a seam on the long raw edge.

I trimmed off the excess material, turned my tube ‘o fabric inside out, and pressed it, making a smashing new sash!

There was one more issue to deal with.

The bottom of the front placket needed to be secured below the bottom button.

In its previous life as a shirt, this would have been the part that was tucked in to some guys trousers (ewwwwwwww!!!!!!! I literally just thought about this!!!!).

I just can’t have that level of gappage at my upper thighs, so I pinned that part down.

After a quick sew, it was good to go!

I pressed my new seams, and my men’s shirt to women’s dress upcycle was all done!

Oh, and check out my cute pocket square!

I used a scrap from my most recent refashion.  I thought it tied in the contrast stitching and my burgundy brogues quite nicely!

I patted myself on the back further for creating my own version of a similar dress by Michael Kors that sells for $130.

When taking something like this in, keep your estimates conservative. You can always go back and tweak it more, but it’s much harder to add fabric back on once it’s cut!