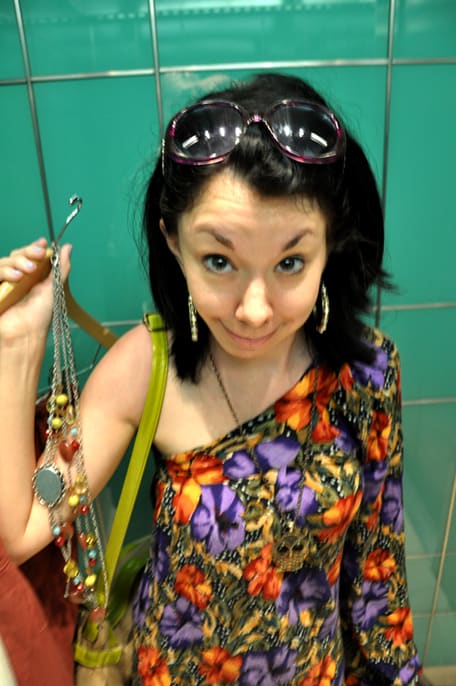 69 shares
Jersey Dress from Old Tees!
How to Crop Jeans

As most of you know by now, last Thursday I made an appearance on Good Afternoon America!

For those of you who missed the show or just have a hankering to watch me again, here ya go!

This was SUCH a fun experience!  The producers and staff were all delightful to work with, and they made it super-easy to make this refash happen (A special shoutout to Tracey!).

Here are some fun behind-the scenes pics!  Thanks to Larry for taking them!

After a repeatedly delayed flight Wednesday night, I barely got any sleep!  I was soooo excited!  🙂  I had to be ready to go at 8am!

After talking with Tracey, a really nice producer for the show, we walked across the street to the studio.  I was immediately whisked away to get prettified!

After getting all gussied up, I was taken outside to pick the refashion that I would be given exactly ONE HOUR to complete live on the show!

Several other audience members brought items they wanted to have refashioned, but this 80’s-tastic jacket needed me!  I couldn’t turn it away!

I rushed back inside to get my sewing area set up.  I realllllly hoped I hadn’t forgotten anything!

Once again, I had exactly an hour to transform this jacket into something that would (hopefully) wow the audience, and my friends at home!

I did a bit of fitting…

Time was running out!  I finished my stitchery and gave everything a good press!

I was hurried off to the set, where I had a blast sharing my refashions with Lara and Josh.  They happen to be GIGANTIC, by the way!  🙂

Scrawny or no, I must admit I’m pretty darn happy with how Kate’s top turned out!  🙂

I had such a blast on this show!  Everyone was simply amazing to work with, and I hope I get the chance to do another refashion challenge like this soon!  🙂

So…if you want me to be on your show, just lemme know!  🙂

Jersey Dress from Old Tees!
How to Crop Jeans
69 shares