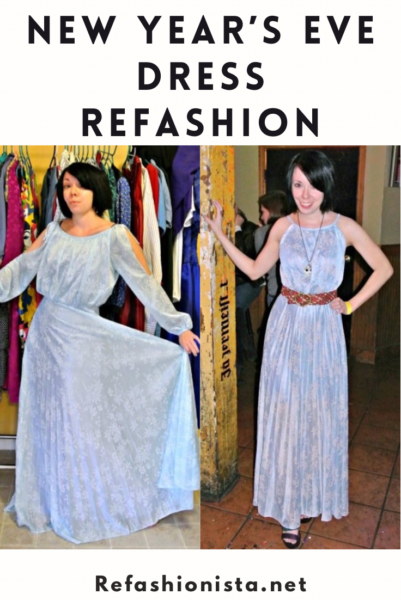 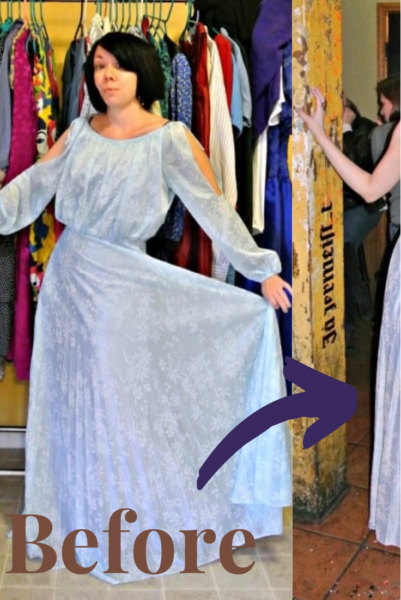 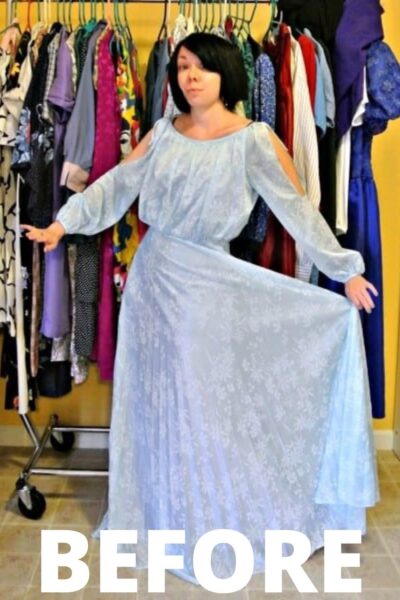 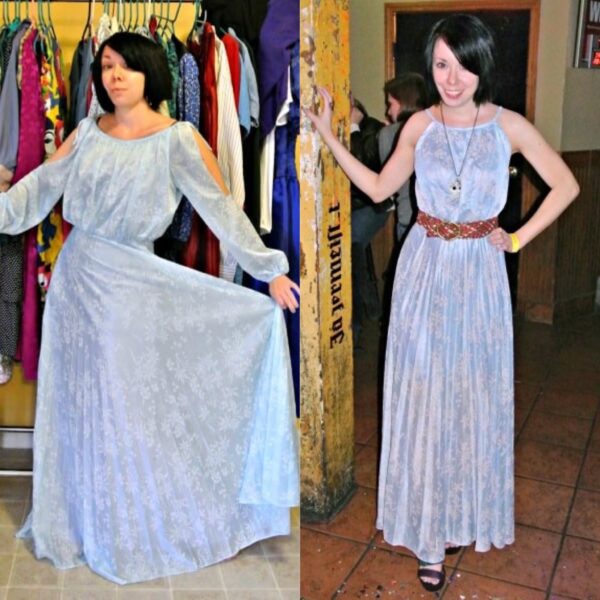 Happy New Year, friends!  🙂  Are you as excited about it as I am?

While last year was very successful in many ways, it was also an emotionally draining one that I’m happy to be closing and putting on the shelf.

I hope you’re as excited as I am!

I was struck by the awesomeness of the Bohemian Elegance dress from ModCloth.

Isn’t this dress just sigh-worthy?  I love it!  I love the brown hue and I love how the bottom is sheer.

I just knew I could make a ModCloth-Inspired New Year’s Eve Dress refashion out of this $1 thrift store find right here:

There are several differences between my thrifty find and my inspiration piece…not the least of which being the color.

The label in my new dress had been completely ripped out, but I should have known it was mostly polyester, which doesn’t take to dye very well.

But I was feeling adventurous!

So I threw my dress in my washing machine with a whole bottle of brown dye and two cups of salt as per the instructions on the bottle.

I should have known there was no way this dress was going to go full-brown.

BUT my efforts weren’t for naught!

I at least managed to muddy up that pale blue a bit, and those flowers were quite transformed from their stark white.  See?

I almost gave up on this dress then and there.  Those newly-revealed stains were just nasty…and I wasn’t sure how to get rid of them.

Unfortunately, it was already New Year’s Eve and my friends were going to arrive to pick me up for the evening’s festivities shortly.

I had to make this work!

Then, I ripped off those sleeves.

This removed some of the grody pitness, but not all of it.

I had to do a bit more ripping to remove the lining from the outer stained layer.

While I was picking, I went ahead and made the distance between the shoulders of the dress narrower.

But Ack!  Those stains!

Suddenly, I knew exactly what to do!

The outer layer is blousier than the lining.  It would need to be taken in if it was going to look anything like the original anyway.  So….two birds!  One stone!

I cut off those stained bits and wished them well on their journey to my trash can.

I closed up my new arm holes, leaving them detached from each other.

For my final trick, I cut off some of the lining so my new dress would mirror the opaque-to-sheer look of my inspiration piece.

I had a wonderful evening with my friends!

I’m so very grateful for the amazing company I keep.  They make the highest highs transcendent and the lowest lows possible to bear.

Cheers to a brand new year full of possibilities!