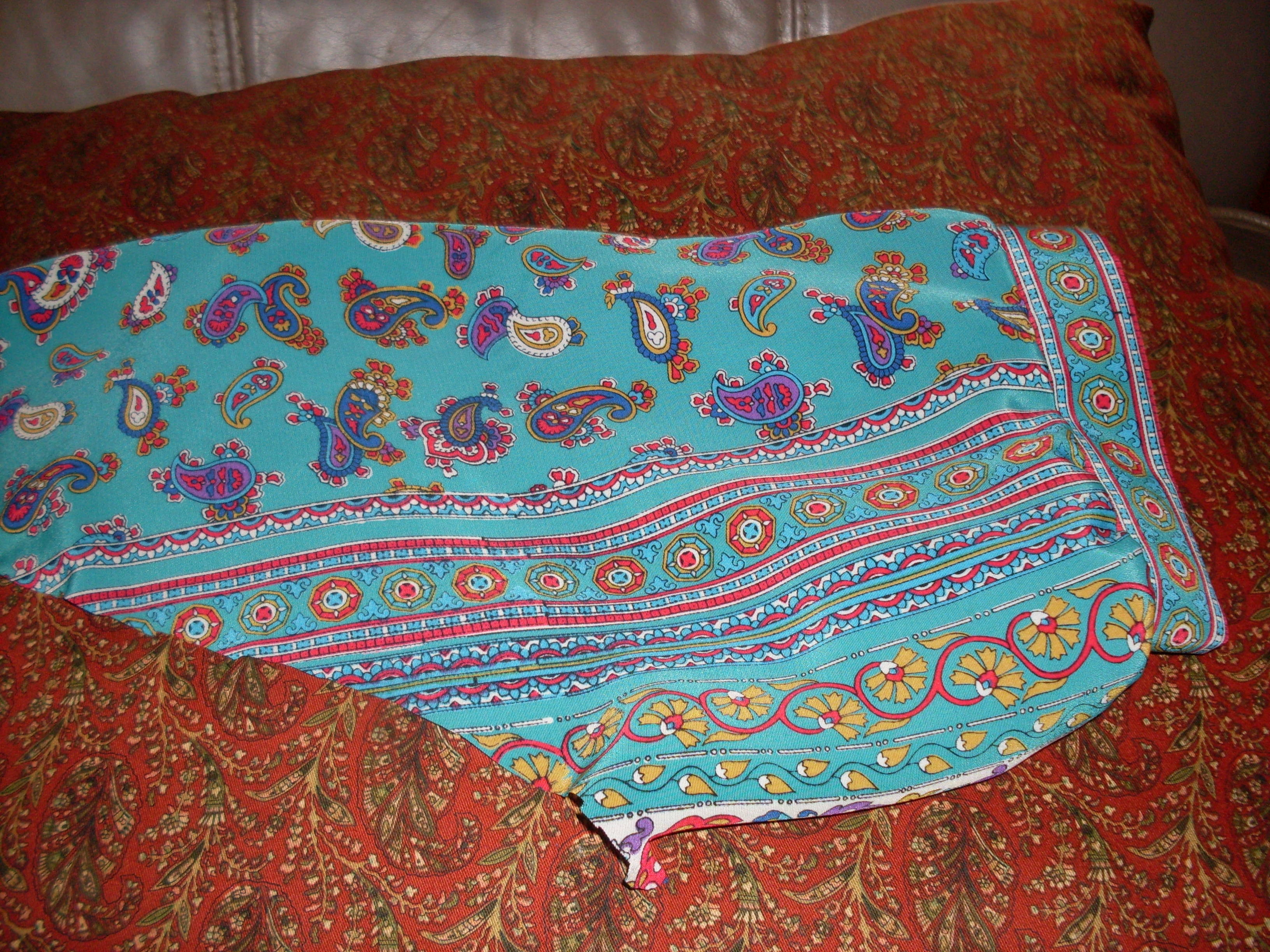 145 shares
Scarf it up baby! Scarf. It. Up.
Fortuny for the Fortuneless

Whoa.  Just Whoa.  What was I thinking when I purchased this scary dress for fifty cents at Goodwill?  I understand your concern.  There isn’t a lot of good in this dress, but there’s a lot of tacky and just plain bad in it.  However, I’m a sucker for teal, and I actually like the print, just not in such a large, bulky quantity.  Call me crazy, but I saw potential.

First off, several things had to go.  That big, functionless button on the neck was removed.  Next to go were the shoulder pads, the weird puffy things that were sewn into the seam between the shoulder and sleeves (like it really needed more poofage), and the sleeves themselves.  Later losers!

Ahhhhhh…better already!  I still didn’t like that big vertical strip on contrasting fabric on the front of the dress.  I also thought the high neck was rather ugly as well.  So, I decided to turn it around and make the back of the dress the front of the dress.  The back originally closed with a couple of buttons.  I removed those, snipped down a couple of inches, and pinned these edges down.  This was going to be the new V-neck for the new front.

Then, I pinned the raw edges under for the arm holes and sewed them down, along with the new neck.

The sleeveless look was definitely an improvement, but I wanted the top of the dress to look more feminine.  To do this, I hand ruched the shoulders.

Now I needed to fix two issues.  First off, the top part of the dress is too big for me.  Also, making the back of the dress the front has made it lay weird, with the front fabric section being smaller than the back.  To fix both of these problems, I folded the back section under the front (about an inch on each side), pinned it, and then sewed it into place.

The last decision I had to make was a difficult one.  Did I want this dress to remain a dress, or turn it into a tunic instead?  The fabric was just too busy to leave the skirt at its current length.  I eventually (I seriously waffled back and forth on this for about 30 minutes) decided to split the difference and make it into a minidress.

I cut a strip from the excess material, and made it into a thin belt/sash for my waist.  For my final steps, I pressed the new hem, and then had to re-press the bottom of every single pleat back in place.

…and as a dress by night!

Scarf it up baby! Scarf. It. Up.
Fortuny for the Fortuneless
145 shares